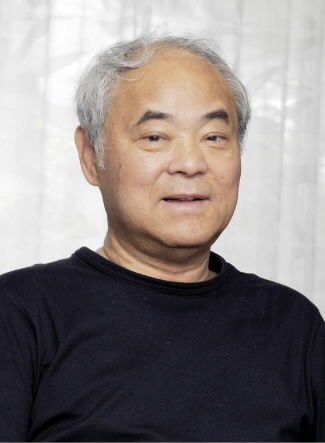 Mr. Nakazawa was born in what is now Funairi Hon-machi in Naka Ward. At the time of the A-bombing he was 6 years old and on his way to Kanzaki National School, 1.2 km from the hypocenter. He was near the school gate when the bomb was dropped. His father, elder sister and younger brother were killed when their house collapsed on them. He lost his newborn baby sister to malnutrition amid the chaos of postwar Japan.

Mr. Nakazawa moved to Tokyo in 1961 at the age of 21 with the ambition of becoming a manga artist. In 1966, after his first work was published, his mother died. At the crematorium he found that almost nothing was left of her brittle bones. “Did the A-bomb deprive me even of my mother’s bones?” he thought. Filled with rage at the atomic bomb and the United States for dropping it, he resolved to convey the horrors of the atomic bombing and war through his manga. Not long after that he produced “Struck by Black Rain.”

In 1973 the serialization of “Barefoot Gen” began in the manga magazine “Weekly Shonen Jump.” While Mr. Nakazawa sometimes suspended work on the series, which was based on his own experiences as an atomic bomb survivor, it eventually filled 10 volumes. The main character, Gen, who grows up as a strong boy in Hiroshima after the A-bombing, struck a chord with readers, and the manga was eventually translated into about 20 languages including English and Russian. This fiscal year the Hiroshima Municipal Board of Education adopted “Barefoot Gen” for use in the school system’s peace education curriculum.

In his later years Mr. Nakazawa’s vision deteriorated as the result of cataracts, and in 2009 he gave up writing. After undergoing surgery for lung cancer in 2010, he moved from Tokorozawa in Saitama Prefecture to Hiroshima and put his energy into talking about his A-bomb experiences at elementary schools and other facilities while battling his cancer.