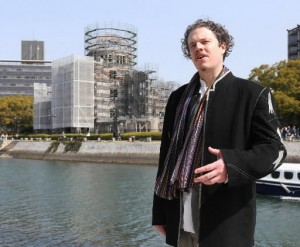 Cannon Hersey, 37, a New York-based artist, is making his first visit to Hiroshima. Mr. Hersey is the grandson of John Hersey (1914-1993), who wrote Hiroshima, a piece of reportage published in 1946 that was one of the first descriptions of the devastation wrought by the atomic bomb. In the interview, Mr. Hersey, who will lead art activities in Japan to appeal for the abolition of nuclear weapons, spoke about his memories of his grandfather and his ideas for the art activities, which begin on March 25.

What are your impressions of Hiroshima?

I realize the wretchedness of the damage caused by the atomic bomb, but at the same time I feel hope for the future and a strong will to help build peace. Being here, I’m naturally reminded of my grandfather. I’ve been able to meet family members of the survivors featured in my grandfather’s book, which was a very emotional experience for me.

What kind of person was your grandfather?

He often said, “People are people regardless of their nationality.” This is probably because he was born in Tianjin, China, as the son of a missionary and lived there until he was 10 years old. In Hiroshima, he faithfully depicted individual experiences, not a war between nations. He was determined to convey their experiences as human beings.

Even today, there are many people in the United States who think the bombings of Hiroshima and Nagasaki ended the war and saved millions of American lives. In those days, especially, it must have been a really hard decision to publish this report about Hiroshima. In fact, it created a sensation, and he also made a lot of enemies. Henry Luce, the founder of TIME magazine, cut off close ties with my grandfather and refused to give him any work.

Did he talk about his experiences in Hiroshima to people in his family?

He never talked about it. He was only 31 when he first visited Hiroshima and it might have been traumatic. I think the experiences of his life made him more serious and stern. For me, though, he was a good editor. He died when I was 16, but until then, I visited him several times a year. When I wrote a poem, he was the first to give me feedback. He often encouraged me to “memorize the dictionary.”

How did he influence you?

My way of thinking is similar to his. I started making art in my teens when I visited Africa and China. I think that human beings are more similar than they are different. I was 12 or 13 when I read Hiroshima. The experience was a great shock to me. The atomic bombings of Hiroshima and Nagasaki are among the biggest tragedies in human history. I use art to communicate because art is beyond language.

What sort of art activities will you be pursuing in Japan?

I’m holding a workshop with around 20 young Japanese and Americans who will visit Hiroshima and Nagasaki. I want to open the door for them to gain a deeper understanding of history and consider what they can do to help realize a world without nuclear weapons. The art work they create will be displayed in Japan and overseas. I’m now also planning an event where projections will be made on the walls of buildings in the A-bombed cities to appeal for peace. I’d like to use these opportunities to convey what happened in Hiroshima and Nagasaki more widely.

Hiroshima
Hiroshima is a piece of reportage written by John Hersey, who visited Japan as a war correspondent in 1946. It was based on interviews with six A-bomb survivors, including the Reverend Kiyoshi Tanimoto. When it was published in The New Yorker on August 31, 1946, the magazine reportedly sold 300,000 copies in one day. It was later reproduced in local newspapers and magazines and also printed as a book. The Japanese version of the book was published in 1949. The current edition of the book includes a chapter titled “The Aftermath,” which John Hersey added after visiting Hiroshima again in 1985.