A-bomb survivor Setsuko Thurlow delivers speech at award ceremony for Nobel Peace Prize: “Let this be the beginning of the end of nuclear weapons” 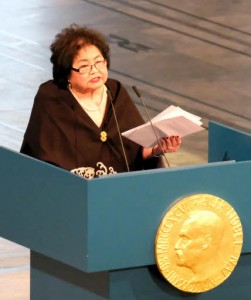 Oslo, Norway — On December 10, the award ceremony was held for this year’s Nobel Peace Prize, which was given to the International Campaign to Abolish Nuclear Weapons (ICAN), a non-governmental organization (NGO), for the contributions it made to the establishment of the Treaty on the Prohibition of Nuclear Weapons. The event took place at Oslo City Hall in Norway.

At the ceremony, Setsuko Thurlow, 85, an A-bomb survivor who is originally from Minami Ward, Hiroshima and now lives in Toronto, Canada, delivered a speech. Ms. Thurlow has actively supported ICAN’s activities by sharing her experience of the atomic bombing. In her address, she stressed that nuclear weapons were not “a necessary evil” but “the ultimate evil” and called for the nuclear weapons ban treaty to be “the beginning of the end of nuclear weapons.”

It was the first time that an A-bomb survivor has spoken at a Nobel Peace Prize award ceremony. Regarding the tragedy of the Hiroshima attack, which she experienced at the age of 13, Ms. Thurlow testified about the inhumane damage of nuclear weapons by saying, “Most of the residents were civilians who were incinerated, vaporized, carbonized.” In addition, she said, “But still some refused to see Hiroshima and Nagasaki as atrocities, as war crimes,” and pointed out how the A-bomb attacks then led to the world’s disastrous nuclear arms race.

She also welcomed the adoption of the nuclear weapons ban treaty at the United Nations in July by saying, “I witnessed, that day, humanity at its best.” She said that all responsible leaders will sign the treaty and she called on the heads of all nations, including the nuclear powers and those countries under the nuclear umbrella, to join the agreement.

Prior to Ms. Thurlow’s speech, she was joined by Beatrice Fihn, ICAN’s executive director, as they received the Nobel Peace Prize medal and award certificate. When Ms. Fihn spoke, she criticized the security policy that relies on nuclear deterrence by saying, “These weapons are not keeping us safe.” She also said, “To all nations: choose the end of nuclear weapons over the end of us,” and asked the people of the world to stand with them and demand that their governments side with humanity and sign the treaty.

Berit Reiss-Andersen, the chairman of the Norwegian Nobel Committee, explained that ICAN had been chosen for the award because its efforts have given new momentum for the cause of abolishing nuclear weapons. However, the ambassadors from the five nuclear superpowers, which are opposed to the nuclear weapons ban treaty, did not attend the event, a virtual boycott of the ceremony. This again highlighted the divide within the international community, regarding nuclear disarmament measures, between the nuclear-armed countries and the non-nuclear nations.

From Japan, Akira Kawasaki, 49, a member of ICAN’s international steering committee, attended the award ceremony. In addition, Terumi Tanaka, 85, the co-chair of the Japan Confederation of A- and H-Bomb Sufferers Organizations (Nihon Hidankyo); Toshiki Fujimori, 73, the assistant secretary general of Nihon Hidankyo; Hiroshima Mayor Kazumi Matsui; and Nagasaki Mayor Tomihisa Taue were invited to attend the ceremony. The prize money is 9 million Swedish kronor (about 120 million yen). ICAN announced that these funds will be used for activities to realize the early entry into force of the nuclear weapons ban treaty.

Treaty on the Prohibition of Nuclear Weapons
The nuclear weapons ban treaty completely prohibits the development, possession, use, and threat of using nuclear weapons. The preamble includes these words: “mindful of the unacceptable suffering of and harm caused to the victims of the use of nuclear weapons (hibakusha).” More than 120 nations took part in the talks to establish the treaty and it was adopted, with 122 votes in favor, at the United Nations in July. The nuclear weapon states, including the United States and Russia, along with nations under the nuclear umbrella, like Japan, did not participate in these negotiations. Once 50 nations have ratified the agreement, it will enter into force in 90 days. To date, 56 nations and regions have signed the treaty.

Commentary: Wish of people in Hiroshima is conveyed to the world

The speech given by A-bomb survivor Setsuko Thurlow at the award ceremony conveyed the catastrophic conditions wrought by the atomic bombing and the wish of the people of the A-bombed city to the world, receiving a favorable response. How can we now encourage the involvement of the nuclear-armed nations, which have snubbed the awarding of the Nobel Peace Prize to ICAN? This opportunity should be used as a driving force to advance the abolition of nuclear weapons, the goal of the A-bomb survivors.

Ms. Thurlow said, “Thus, with one bomb my beloved city was obliterated.” While pushing her aging body to the limit, she has shared her experience of that day countless times. She eloquently explained how the abolition aim has fueled efforts from the A-bombed city based on the belief that “We must not tolerate this insanity any longer.”

She also criticized the fact that the United States has long justified the atomic bombings and how this has led to the world’s nuclear arms race. To “the nuclear-armed nations” as well as their “fellow criminal” countries that cling to the nuclear umbrella, she stated pointedly, “You are each an integral part of a system of violence that is endangering humankind.” With this remark, she was referring to the attitude not only of the United States but also of the Japanese government.

With North Korea accelerating its efforts to develop its missiles and nuclear weapons, security conditions have become increasingly precarious. The nuclear powers are fiercely against the nuclear weapons ban treaty and have not softened the tone of their counterargument, contending that “The treaty ignores the current security threats.”

Under such conditions, this Nobel Peace Prize is significant because it was awarded to an international movement in which volunteers in non-nuclear nations and civil society worked together to clearly define nuclear weapons as illegal. The challenge ahead will be on actions to gain more support for the treaty from the international community and advance the abolition wish of the people of Hiroshima by making use of the cumulative efforts of the A-bomb survivors and the awarding of this prize.