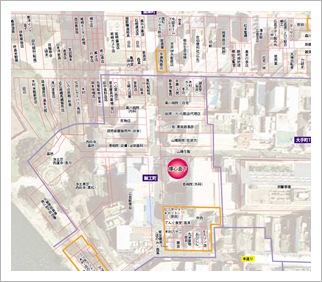 This is a restored map of the townscape of the neighborhood which lay near the hypocenter. The map was created in conjunction with the special series “Record of Hiroshima: Photographs of the Dead Speak,” which was published in the Chugoku Shimbun from 1997 to 2000. The map covers the area of present-day Hiroshima Peace Memorial Park in downtown Hiroshima.

The Chugoku Shimbun conducted a survey to investigate the circumstances of each person who was present in the vicinity of the hypocenter on August 6, 1945. With the cooperation of former residents and the families of former residents who had already died, the Chugoku Shimbun restored the locations of houses, offices, buildings that were demolished in the war effort, and buildings that were moved under orders from the government. This information was then specified on the map. With regard to the locations of houses, the Chugoku Shimbun referred to “Shigai Kaoku Zu” (“The Map of Houses”), which was published in 1927 and is housed in the National Archives of Japan, among other sources. Some shop names on the map were based on entries in a Hiroshima telephone directory published in 1942. The restored map of the hypocenter is used on municipal plaques describing the A-bomb damage that were placed in 2008 in four former districts that once lay in the area now occupied by Hiroshima Peace Memorial Park.