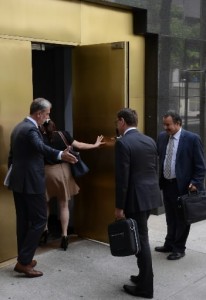 The Review Conference of the Nuclear Non-proliferation Treaty (NPT), held every five years at United Nations headquarters in New York, ended in failure on May 22 without adopting the final document which serves as a guide for nuclear disarmament efforts in the future. In the year marking the 70th anniversary of the atomic bombings of Japan, the failure of the conference impedes momentum toward “a world without nuclear weapons.” What led to this outcome? Did any breakthroughs occur? The Chugoku Shimbun analyzes the four-week session.

On May 20, two days before the conference concluded, representatives from the five nuclear weapon states and the leading non-nuclear weapon states, including Mexico, Ireland, and Cuba, met behind closed doors at the Permanent Mission of Algeria to the United Nations, near U.N. headquarters, and discussed measures for nuclear disarmament that would be incorporated in the draft of the final document. From time to time, the diplomats stepped out for a breath of air, their faces revealing fatigue and impatience. One of the delegates from the non-nuclear countries commented that the likelihood of reaching an agreement was 50-50. The discussion wore on into the night.

The NPT permits five countries--the United States, Russia, the United Kingdom, France, and China--to possess nuclear weapons while at the same time obliging all member nations to pursue negotiations for nuclear disarmament. To date, the Review Conference has had a history of successes and failures as a result of disputes between the nuclear haves and the have-nots. Over the past five years, following the Review Conference in 2010, the patience of the non-nuclear countries has worn thin over the slow pace of the nuclear powers in pursuing nuclear reductions and they have intensified their demands for a legal ban on nuclear arms based on their inhumane effects. This year’s Review Conference opened in this context. Rising tensions between the two sides had been predicted by many experts.

As expected, starting with the General Debate session in the early stage of the Review Conference, the member nations each delivered their arguments and heated debate soon ensued. In the final stage of the conference, the difficulties in preparing the draft of the final document came to a head. The nuclear weapon states complained that the draft document included too many descriptions concerning the inhumanity of nuclear weapons; that a nuclear weapons convention would endanger the stability of the world; that there was no option other than phased disarmament; and other areas of concern. The nuclear powers, including the United States and Russia, whose relationships where already at a low ebb over the Ukraine crisis, were united in their resistance against the non-nuclear states, which seek to outlaw nuclear arms.

Preparing the draft of the final document was ultimately undertaken by Conference President Taous Feroukhi. Her document, presented early on May 21, significantly scaled back the proposals put forward for nuclear disarmament. Although the document at least included language which recommends establishing a working group to identify legal alternatives for nuclear abolition, the words “nuclear weapons convention,” which had appeared in the original draft, were removed. And wording which urged further reductions in nuclear arsenals was thoroughly diluted. One diplomat who has been dedicated to advancing the cause of nuclear disarmament revealed in an interview with the Chugoku Shimbun that the appeals by the non-nuclear weapon states were not reflected in the final document. Lamenting this outcome, he said there was no need for the document to be adopted.

The Review Conference works on the basis of consensus, which means that a decision is put off if at least one country disagrees. Such a system produces either compromise or failure. The final meeting began on the evening of May 22. Rose Gottemoeller, the Under Secretary of State for Arms Control and International Security for the U.S. State Department, was the second speaker and she rejected the final document with the words, “We regret that we were not able to support the draft consensus document tabled by the President of the conference.” At that moment, when the failure of the conference became a foregone conclusion, representatives in the gallery from the non-governmental organizations (NGOs) let out audible sighs.

However, the reason that Ms. Gottemoeller gave for rejecting the final document was related only to an issue involving the Middle East. With Israel in mind, which is a non-signatory to the NPT and a de-facto nuclear power, the final document included language about convening a conference, no later than March 1, 2016, to pursue a Middle East zone that would be free of all weapons of mass destruction. All nations in the Middle East would be invited to take part. However, the United States, an ally of Israel, rebuffed the plan, calling it “unrealistic and unworkable.” In the end, this issue involving the Middle East became the main obstacle to maintaining momentum for global nuclear disarmament.

With that, the conference broke down and 35 nations demanded a chance to speak, many of them airing their frustrations to the nuclear powers. Amid these circumstances, the government representative from South Africa elicited vigorous applause with the words, “The NPT was never intended to entail or to translate into the indefinite possession of nuclear weapons.” He added that he felt the nuclear weapon states lacked a sense of moral courage, and that the NPT seems to have degenerated into a state of minority rule, similar to what had occurred in South Africa under apartheid, in which the will of the few prevailed. His comment sharply underscored the limits of the NPT.

Nuclear Non-proliferation Treaty (NPT)
The Nuclear Non-proliferation Treaty took effect in 1970 and was extended indefinitely in 1995. A Review Conference is held every five years to assess the implementation of the treaty. A total of 191 states have joined the treaty to date. India, Pakistan, and Israel, a de-facto nuclear weapon state, have not joined the treaty. North Korea announced its withdrawal from the treaty in 2003. The treaty limits the nuclear weapon states to the United States, Russia, the United Kingdom, France, and China. While the treaty bans non-nuclear states from manufacturing or acquiring nuclear weapons, it grants them the right to the peaceful use of nuclear energy.