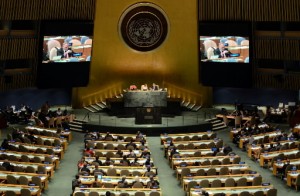 At the Review Conference of the Nuclear Non-Proliferation Treaty (NPT), held recently at United Nations headquarters in New York, the member parties to the treaty discussed measures for nuclear disarmament over the course of four weeks. After it became clear that the conference had failed, when the participants could not agree to approve the final document at the plenary meeting on May 22, the final day of the conference, Alexander Kmentt, the Director for Disarmament, Arms Control and Non-Proliferation of the Austrian Federal Ministry for European and International Affairs, asked to speak. Mr. Kmentt said, “We call on all parties to the NPT to pursue effective measures to fill ‘the legal gap’ for the prohibition and elimination of nuclear weapons.” With these words, he conveyed a clear intention not to give up on the goal of banning nuclear weapons.

Austria has led a group of nations which seek to realize a ban on nuclear weapons based on their humanitarian consequences. At this year’s Review Conference, Austria submitted a document known as the “Humanitarian Pledge,” which declares a commitment to nuclear disarmament. Through close cooperation with antinuclear non-governmental organizations (NGOs), the number of countries beyond Austria which endorsed the Pledge during the conference rose to 106, forming a majority of the 191 states and regions that are signatories to the NPT. As a result, important progress has been made in building the foundation for future full-scale discussions on outlawing nuclear arms.

The fruits of diligent diplomatic efforts to advance the abolition of nuclear weapons can be seen in the final document of the conference, despite the lack of agreement it received. The final document now recommends that the U.N. General Assembly, which will begin meeting in September, establish a working group to identify “effective measures,” including legal provisions, to achieve and maintain a world without nuclear weapons. The document also recommends that the working group conduct its work on the basis of consensus in order to promote the participation of the nuclear weapon states, to which the relevant countries have reportedly agreed. In this light, if any nation proposes that such a working group be established at the U.N. General Assembly, it would then be possible to discuss launching negotiations on a nuclear weapons convention at its session.

“Diplomatic negotiations toward banning nuclear weapons are sure to start,” said Tim Wright, the Asia Pacific director of the International Campaign to Abolish Nuclear Weapons (ICAN). He pointed out that countries which are now protected by the nuclear umbrella would come under pressure from the international community.


Cool response to removal of language on visit to A-bombed cities
Japan does not support the Humanitarian Pledge. This past March, in the Budget Committee of the Diet’s Upper House, Prime Minister Shinzo Abe stressed that the government would not back Austria’s proposal because the concept of the Humanitarian Pledge contradicts Japan’s security policy. While appealing for the abolition of nuclear weapons, as the only nation to have experienced nuclear attack, Japan nevertheless remains under the U.S. nuclear umbrella. This contradictory antinuclear policy is eyed sharply by other NPT members states and NGOs. Their critical view of the Japanese government was clearly reflected in the cool response to China’s opposition to the call by Japan for world leaders to visit the A-bombed cities.

Japan had sought to encourage a visit to Hiroshima and Nagasaki and the chance to hear the voices of atomic bomb survivors, and its proposal was included in the original draft of the final document. However, this language was removed in the face of China’s strong opposition, contending that Japan was seeking to cover up its wartime aggression. China, in turn, was criticized for bringing up the issue of historical perceptions in negotiations involving nuclear disarmament. However, sympathy for Japan was not widespread. One NGO member from abroad interpreted the backdrop of this outcome in the following manner: The Japanese government continues to cling to the nuclear umbrella and, for this reason, Japan seems to use the A-bombed cities for its own convenience, merely as a means of creating the impression that it is taking the lead in advancing nuclear disarmament.


Persisting in conventional approach for nuclear disarmament
While making diplomatic efforts to restore the wording for a visit to Hiroshima and Nagasaki, Japan persisted in its conventional approach for nuclear disarmament, arguing that there are no shortcuts to nuclear disarmament and non-proliferation and that the cause must be advanced through practical and concrete measures. With the understanding of the humanitarian consequences of nuclear weapons spreading among the international community, consequences which the aging A-bomb survivors have long been trumpeting based on their personal experiences, demands for Japan to change its contradictory policy involving nuclear arms will only grow.

On May 1, at the official NGO session of the NPT Review Conference, Hiroshima Mayor Kazumi Matsui, the president of Mayors for Peace, called on government representatives to move beyond a security framework which relies on nuclear deterrence. The membership of Mayors for Peace is composed of 6675 cities in 160 countries and region. Appealing to the audience, Mr. Matsui said that now is the time to work towards the abolition of nuclear weapons and create an international environment that will make this possible. Hiroshima and Nagasaki must join forces and press Japan and the wider world to realize this goal.

Movement to stress the humanitarian consequences and non-use of nuclear weapons
Following the previous Review Conference of the Nuclear Non-proliferation Treaty (NPT) in 2010, which expressed deep concerns over the catastrophic consequences of using nuclear arms, discussions about the inhumanity of these weapons have intensified. At the first session of the preparatory committee for the 2015 NPT Review Conference in 2012, 16 countries, including Switzerland and Austria, issued a joint statement which called for efforts to outlaw nuclear weapons based on their humanitarian impact. This year’s Review Conference is the sixth time that such a statement was submitted, and it was backed by a record 159 countries. However, the statement does not mention outlawing nuclear weapons despite calling for their non-use. Japan has joined the countries supporting these joint statements since their fourth iteration in October 2013. To date, there have been three gatherings of the International Conference on the Humanitarian Impact of Nuclear Weapons, led by humanitarian groups and supportive nations.