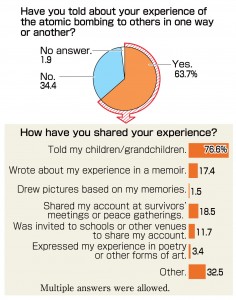 The percentage of A-bomb survivors living overseas who have shared their experience of the atomic bombing with others is lower than that of survivors living in Japan, the results of a survey have found. The survey indicates that many survivors living abroad tell their experiences only to their children and grandchildren. The survey, which was conducted by the Chugoku Shimbun to coincide with the 70th anniversary of the atomic bombings, has also found that survivors’ attitudes reflect the conditions of the countries in which they live, such as the United States and South Korea.

The survey was carried out between October 2014 and February 2015, with a total of 416 people living in six countries responding: survivors in South Korea, the United States, Canada, Brazil, Argentina, and Paraguay. With the support of local survivors’ groups, 191 and 181 survey sheets were returned mainly by mail from South Korea and North America (the U.S. and Canada), respectively. For South America, a reporter from the newspaper accompanied a group of medical doctors dispatched by Hiroshima Prefecture last October to provide medical consultations for A-bomb survivors there. The reporter handed out survey sheets to survivors and collected 44 of them in Brazil, Argentina, and Paraguay.

Asked “Have you told about your experience of the atomic bombing to others in one way or another?”, 63.7 percent of the respondents answered “Yes.” In an earlier survey conducted in Japan by the Chugoku Shimbun, 74.4 percent of the respondents, more than 10 percentage points higher, answered “Yes.” The percentage of those who gave a positive response to this question in North America was 75.1, almost the same as in Japan, but was only 52.4 in South Korea, which lowered the overall percentage.

To the question “How have you shared your experience?”, to which multiple answers were allowed, the highest percentage of respondents, 76.6 percent, chose “Told my children/grandchildren,” which was higher than the 70.0 percent in Japan. On the other hand, 35.7 percent of respondents in Japan answered that they have shared their accounts at peace gatherings, 30.8 percent to children at schools. The percentages of those living overseas who gave the same answers were 18.5 and 11.7 percent, respectively. This shows that survivors living outside Japan have been telling their experiences to their children and grandchildren, but they have had fewer opportunities to share their experiences at public venues.

As for why they have not shared their experiences, 31.5 percent of the respondents chose “It is painful to remember.” (Multiple answers were allowed.) This highlights the fact that the survivors’ terrible experiences still weigh heavily on their hearts. “Afraid of making myself/my family a target of discrimination” was chosen by 19.6 percent of survivors living abroad, notably 26.1 percent by the survivors in South Korea. This is much higher than the 12.6 percent in Japan.

A-bomb survivors residing overseas
Some of those who experienced the atomic bombings in Hiroshima or Nagasaki have been residing outside Japan. According to the Ministry of Health, Labour and Welfare, the number of holders of the Atomic Bomb Survivor’s Certificate who live abroad is 4,440, and they live in 35 countries and regions, as of the end of March 2014. The largest number is 3,050 living in South Korea, followed by 980 in the United States and 150 in Brazil. It is estimated that there are many survivors who do not hold the survivor’s certificate. According to data obtained by the Japan Congress against A- and H- Bombs, there were 382 survivors living in North Korea in 2008.

Hiroshima Asks: Toward the 70th Anniversary of the Atomic Bombing: Report on survey of A-bomb survivors living abroad
ツイート
Return