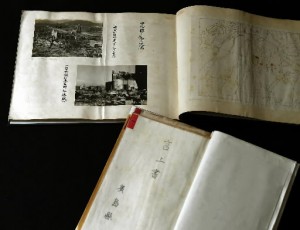 It has been learned that, in September 1945, Emperor Showa (Hirohito) saw a collection of photographs which showed the devastation in Hiroshima caused by the August 6 atomic bombing. Created by the Imperial Japanese Army’s Shipping Command, The Collection of Photographs of the War Damage in Hiroshima from August 6, 1945 holds 45 photos. It has also been learned that related reports written by the Hiroshima prefectural government and others still exist. The photo collection and the reports are now kept in the Imperial Household Archives, within the Archives and Mausolea Department of the Imperial Household Agency. A biography of Emperor Showa’s life states that he saw the photo collection. Researchers compiling Hiroshima’s 70-year history since the atomic bombing have sought to verify the important historical fact that the emperor confirmed the actual consequences of the atomic bombing shortly after the event took place.

The entry for September 1, 1945 in the biography, which was made public last year, says that chamberlain Torahiko Nagazumi was dispatched to Hiroshima because “immense war damage was inflicted on the city.”

Mr. Nagazumi conveyed the imperial will at the office of the prefectural government on September 3. (The government office had completely burned down and was temporarily located in a building of Toyo Kogyo (now Mazda Motor Corporation). He visited a temporary hospital at Honkawa National School (now Honkawa Elementary School in central Hiroshima) and other places. The biography says that Mr. Nagazumi went back to Tokyo on September 5 and reported on his mission that same day and on September 14. It also says that Masao Tsuzuki, a professor at Tokyo Imperial University, explained about the atomic bombs.

The 28-page photo collection is 30 by 38 centimeters. It is composed of two parts: the damage in the city center and the conditions of burn patients. The photos were taken by members of the photography team of the Imperial Japanese Army’s Shipping Command, which was located in the Ujina area of today’s Minami Ward.

The 29 photos of downtown Hiroshima depict the terrible sights of the Kamiya-cho area and the Aioi Bridge, which are close to the hypocenter, and the Hiroshima Red Cross Hospital, among other scenes. Most of the photos were taken on August 9 while photographers were accompanying a survey team dispatched from the Imperial General Headquarters in Tokyo. The 16 photos of burn sufferers show their appalling state. These photos were taken on August 7 and later at various places including an army quarantine station on Ninoshima Island, which took in injured soldiers and civilians.

The photo collection was not made public under the occupation of the General Headquarters of the Allied Forces (GHQ) because of the censorship it imposed. The collection was disclosed in 1952, when Japan regained its sovereignty.

The photo collection shown to Emperor Showa was the first collection of A-bomb photographs.

The report compiled by the prefectural government described the damage and was delivered by Governor Genshin Takano. The report states, “The death toll has already exceeded 253,000” as of September 1, 1945. In the report are notes apparently written by Mr. Nagazumi. One note says, “Ordinary times, population 300,000.” The City of Hiroshima reported that the number of children who lost both parents had reached 500.

According to the biography, Professor Tsuzuki provided explanation on the nature of atomic bombs at the Imperial Household Agency on September 6. Notes taken on the symptoms of radiation effects still exist.

The photo collection and reports were kept by the then Ministry of the Imperial Household, then moved to the Archives and Mausolea Department for permanent preservation in 1971. Under the law on the management of official documents, enforced in 2011, the Imperial Household Archives holds these materials and other specially designated historical documents. The documents are available for public perusal.

Part nine of the biography of Emperor Showa, covering the years 1943 to 1945, will be published in September 2016.

Emperor learned about tragedy shortly after the bombing

This is new historical evidence that Emperor Showa learned the specific details of the horrors of the atomic bombing at an early date. Even experts did not know that the Imperial Household Agency had A-bomb-related materials. There is also a record on his visit to Hiroshima Prefecture in 1947. We need to delve into what views Emperor Showa had on Hiroshima.