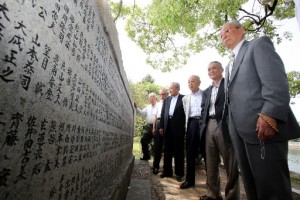 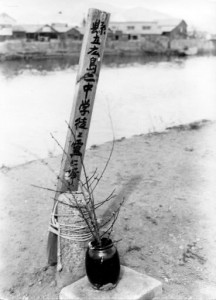 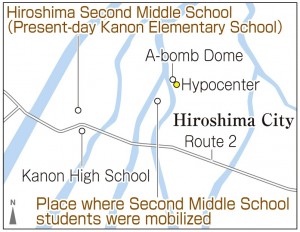 Association of former students mourn lost schoolmates
On June 23, six men gathered together on the left bank of the Honkawa River, which flows by the Hiroshima Peace Memorial Park in Naka Ward.

Yasushi Mizoue, 83, the former president of the Naruto University of Education and a resident of Onomichi, a city not far from Hiroshima, greeted former schoolmates for the first time in 70 years, and said, “Today I feel like I did when I was a new student.” Mr. Mizoue put his hands together in prayer before a monument standing on the left bank of the river.

The six men entered Hiroshima Second Middle School (now Kanon High School) in 1945. On August 6 of that year, the school’s first-year students were mobilized to work for the war effort at this location, helping tear down homes to create a fire lane in Nakajima-shinmachi. All who assembled here lost their lives that day, and now the names of 321 students are engraved on the monument.

Mr. Mizoue gazed at the names of the students, lost friends he had known since they were in elementary school at Fukuromachi National School, and talked about his days as a first-year student at Hiroshima Second Middle School. He lived with his father, Noboru, then 38, a teacher at Hiroshima Municipal Girls’ High School (now Funairi High School), in Fujimi-cho (now part of Naka Ward.) His mother and younger siblings had been evacuated earlier to Onomichi, his father’s hometown.

After entering middle school, he engaged in military drills day after day. While at home, he saw a U.S. plane flying in the sky and fled to an air raid shelter. “I was frightened and trembling, and I begged by father to let me join my mother and my siblings in Onomichi.” In the end, he transferred to Onomichi Middle School (now Onomichi Kita High School) in May.

“I will take my students to help tear down buildings to create a fire lane. I hope you’re studying hard,” Mr. Mizoue’s father wrote in a letter to his family before he perished in the atomic bombing. No trace of his remains was found. Mr. Mizoue felt guilty about the fact that he had left Hiroshima before the bombing. Because of this, for a long time he didn’t admit to having been enrolled at Hiroshima Second Middle School.

Today, Mr. Mizoue serves as the president of the Mitsugi Town Confederation of A-bomb Sufferers, based in Onomichi. Hiroshi Mitsunari, 83, a resident of Asaminami Ward, became aware of this through the newspaper and asked Mr. Mizoue to take part in an association of former students of Hiroshima Second Middle School who entered the school in 1945. At the time, Mr. Mitsunari and Mr. Mizoue were classmates.

Mr. Mitsunari acknowledged, “I also transferred to another school and lost my father to the atomic bombing.” He had evacuated to the city of Fuchu, where his uncle lived, with his mother and other family members in July 1945. His father, Senitsu, then 42, was the vice principal at Takeya National School and stayed behind in Hiroshima. He was killed at the school when the A-bomb exploded.

The association now has 14 members, including some who live in the Kanto region. Starting in 1999, one of the former students, Atsushi Tokiyasu, who died last year, had sought to find his old schoolmates, who have dwindled in number and tend not to speak about the school, in order to form the association. The group then began holding a memorial service each year on August 6.

The monument is 1.5 meters high and 5 meters wide with the names inscribed on the back. It was constructed in 1961 by the Bereaved Families Committee of Hiroshima Second Middle School. Yasuki Miyazato, 82, a resident of Hatsukaichi, recalled, “It was very tough for me to meet the parents of schoolmates who were killed.” Mr. Miyazato helped establish the association with Mr. Tokiyasu.

If the train hadn’t been delayed

When Yukou Tamagawa, 82, a resident of Akitakata, broke the silence by saying, “If the train hadn’t been delayed, I wouldn’t have survived,” Eiji Nakano, 82, and Kanae Ishi, 82, residents of Higashihiroshima, nodded.

The three men commuted to school by train on the Sanyo Line. They said about ten schoolmates made this trip from present-day Higashihiroshima. But that morning, the train paused on the tracks because an air raid alert was issued at 7:09 a.m. The alert was called off at 7:31 a.m, according to the Record of the A-bomb Disaster.

When the atomic bomb exploded, they were waiting for a street car in front of Hiroshima station, about two kilometers from the hypocenter. Mr. Tamagawa managed to return home after being exposed to the bomb’s thermal rays. He said, “Fumiharu’s mother came to my house and asked, ‘Do you know where my son is?’ I still remember the sorrow in her voice.” Fumiharu Kano, then 12, had entered the middle school from Saijo National School together with Mr. Tamagawa. According to Fumiharu’s family, his remains were not found.

After visiting the monument, the men had lunch and shared memories of the middle school at a time of war, reflecting on school uniforms that were hand-me-downs from older students and the textbooks of that era. Mr. Mizoue, who pursued a career in education, said quietly, “Middle school students were just about to begin their own lives. But they suddenly lost their lives instead. The school system should never have had all those students mobilized for work, with the risk of air strikes, using them like tools.”

Mr. Tamagawa has sought to hand down his experience of the atomic bombing to younger generations, because he wants people to understand that the deaths of his former schoolmates have served as the foundation for the peace enjoyed today.

Members of the association have vowed to continue the group’s activities until there are no members left. They grieve over the loss of their many schoolmates, and appeal for a lasting peace. This is why they came together to share their story.