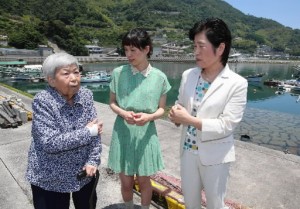 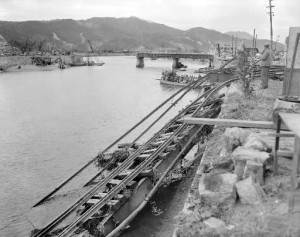 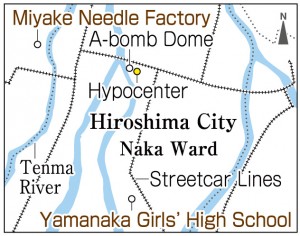 Former student encourages teacher to talk about her hardships
Sahoko Matsui (nee Hashimoto), 85, a former elementary school teacher, lives on Shimokamagari Island in the Seto Inland Sea. Recalling her school days, she said, “I left the island to study, but all I did was work in factories.” Following her father’s advice, she had taken a room in Hiroshima and entered Yamanaka Girls' High School, which was the first girls’ high school in Hiroshima Prefecture.

The school was located in downtown Hiroshima. In her second year at the school, Ms. Matsui and her classmates worked year round at a Mitsubishi Heavy Industries factory in today’s Nishi Ward. In April 1945, the school became a high school affiliated with a young women’s institution (today's Fukuyama Junior and Senior High School attached to Hiroshima University). They were then students of the new school, but worked at Miyake Needle Factory in Tenma-cho (today’s Nishi Ward).

Ms. Matsui got up at 5 a.m. every morning, put rationed soy beans and rice cooked with barley into her lunch box, and left for work. She would hammer iron bars to remove the rust. She heard that the iron would be made into machine gun bullets. She worked from 7:30 a.m. to 5 p.m. When blood oozed from her palms, she reminded herself that all this hard work would help her nation win the war. She worked with about 50 classmates at the needle factory.

On August 6, 1945, they were digging an air-raid shelter by the factory, located 1.2 kilometers from the hypocenter. When the atomic bomb exploded, she was exposed to its heat rays and fled through the flames. She was taken to Koi National School (now Koi Elementary School), where civil defense volunteers from her island found her on August 11.

Referring to the fact that her face had been transformed by her injuries, she said, “They didn’t believe it was me, and told me ‘Hashimoto’s daughter was killed and we had a funeral on the island.’”

Not wanting her to suffer the pain of seeing her face, her parents put away all the mirrors in their home and covered everything that would cause a reflection with paper. “It was such a hard time, and I didn’t want to trouble my parents, so I thought I would be better off dead.”

According to a record compiled in 1985 by the school’s alumni association to remember the victims, 15 students from her class died while working at the needle factory. In all, there were 404 victims from the school, among them first- and second-year students working to tear down buildings to create a fire lane near city hall.

The school resumed classes in today’s Kure City and Ms. Matsui managed to return the following year. But she always felt sorry that she was unable to help save her classmates.

She graduated from the school in 1948 and became an assistant teacher in her hometown. Since she was not in the best of health, she thought it would be just a temporary job. “Children hugged me, though I had scars from my burns. I felt happy to be needed,” she said. Later she became a fully qualified teacher and taught at schools on the island for 35 years. She also raised two daughters.

As a result of her own bitter experience, being unable to focus on her studies, she told her students that they should learn as much as they like about whatever interests them. But she could not bring herself to tell them about the war or the atomic bombing. It was too much for her to bear.

But this changed in 1995. Takako Nishimura, now 63, and her daughter, then a second-year junior high school student, visited the island from the city of Higashi-hiroshima and asked Ms. Matsui to share her experience. Ms. Matsui had taught Ms. Nishimura at Ojizo Elementary School on the island. Moved by their encouragement, Ms. Matsui talked about her classmates’ deaths and the hardships she went through after she was exposed to the atomic bomb. With the Nishimuras, she also attended a memorial ceremony for students from her high school on the 50th anniversary of the atomic bombing.

She offered a prayer to the monument, which stands in central Hiroshima where many students died, and saw her former homeroom teacher, Sakae Hiraga (nee Mizuki), 92. She remembered that Ms. Hiraga encouraged her when she returned to school, saying, “It’s good that you survived.” Since that time, Ms. Matsui has been sharing her account at kindergartens, elementary schools, and junior high schools on the island for more than 10 years.

Ms. Nishimura and her daughter visited Ms. Matsui earlier this month. Ms. Nishimura said, “Ms. Matsui taught us to be strong and patiently endure hardship.” Her daughter, Risa Takuaki, 34, said, “Now that I have my own family, I think about the grief of the victims’ parents.” Ms. Nishimura and Ms. Takuaki will attend this year’s memorial ceremony on behalf of Ms. Matsui, who is advancing in age.

Enjoying the sea breeze on the coast near her home, Ms. Matsui said to them in a gentle voice, “Be grateful that you live in times of peace, and always be considerate to your family and friends.”