Hiroshima: 70 years After the A-bombing: Wartime life of mobilized student, killed in Hiroshima A-bombing, is handed down in diary 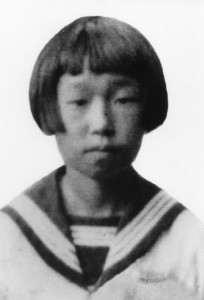 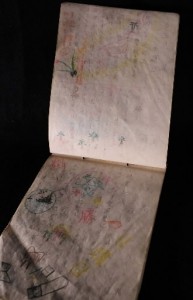 One student who was killed by the atomic bombing in Hiroshima on August 6, 1945 had kept a diary. Mutsuko Mikami, then 14, was a first-year student at Yamanaka Girls' High School (today's Fukuyama Junior and Senior High School attached to Hiroshima University). She recorded how she spent her days at the time when students were forced to give themselves to the nation’s war effort. Her diary was preserved by her mother, who was at her bedside when she died. Now the diary is held by her sister.

With the words “Life Diary” on the cover, the pages describe the teenager’s life between June 18 and July 18, 1945. One entry was made each day with pictures drawn in colored pencil.

The June 22 entry says, “I took part in cultivating the land on the East Drill Ground. I worked frantically so I wouldn’t fall behind the students from other schools.” On the following day, she wrote, “I worked at the East Drill Ground again.” In order to increase food production, middle school students were mobilized to help cultivate the land on the drill ground, which was located to the north of today’s Hiroshima Station. In April 1945, the government had ordered all schools, except national primary schools, to suspend classes.

July 7 was the anniversary of the Lugouqiao Incident (1937), which marked the start of the Sino-Japanese War. Mutsuko wrote, “We must win this prolonged war.” On July 10, she said, “Today we practiced martial arts in hand-to-hand combat training. It went on and on and we were dripping with sweat.” The entries offer a glimpse of the militaristic education of the time, which sought to imbue Japanese girls with fighting spirit for the war effort.

The students went to their schools during breaks in their work as mobilized students. On July 15, Mutsuko wrote, “We went home when an air-raid alert was issued.” She wrote more and more about air-raid warnings. On July 18, she said, “While writing in this diary, I always hear air-raid alerts. I now realize that my handwriting is getting sloppier.” This was her last entry.

The first-year students from Yamanaka Girls' High School were sent to the Zakoba-cho area (now part of Naka Ward) to help dismantle homes to create a fire lane in the event of air raids. Working outside, 1.2 kilometers from the hypocenter, 115 of them were confirmed to have died as a result of the A-bomb blast. Mutsuko was taken to an aid station at Otake National School (now Otake Elementary School). She was brought home by her family but died on the evening of the following day, August 7, at their home in today’s Otake, located in the western part of Hiroshima Prefecture.

Mutsuko’s mother Shigeko kept her second daughter’s diary, but she died in 2002 at the age of 95. Now Shigeko’s fourth daughter Eiko Moritani, 78, holds the diary. Asked what made her decide to share her sister’s diary with the public, Ms. Moritani said, “I heard that she sang a line from a war song, about being ‘resolved to win,’ threw herself face down on my mother’s lap, and died. For us, this is also a diary of my mother’s grief.”