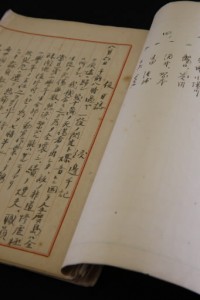 A total of 6,255 students from 28 schools lost their lives in the atomic bombing of Hiroshima while working as mobilized students on that morning of August 6, 1945. Among 24 existing schools and school corporations connected to those 28 schools, at least five have preserved the daily records of school affairs which include entries written on the day of the bombing. These records serve as primary sources which reveal the fates of students in this unprecedented disaster involving education.

Yazo Watanabe (1879-1978) was the vice principal of Shintoku Girls’ High School. He started logging impressions of the bombing on August 6, 1945, the day of the catastrophe. According to the school, this record had not been made available to the public before.

Mr. Watanabe’s first entry reads: “Shortly after 8 a.m., there was a flash and a boom. The students were caught in this terrible disaster as they were preparing to move through the school gates. The situation is dreadful.” The students had gathered on the school grounds, 1.4 kilometers from the hypocenter, before leaving for their work site, where they would help dismantle buildings to create a fire lane in the event of air raids.


Confusion continues after end of war
Mr. Watanabe was at his home in Midori-machi (now Minami Ward) at the time of the bombing. He was injured but went to school the following day to address the emergency conditions. On August 8, he wrote: “More and more parents are searching for their children. It’s hard to respond to their inquiries. I have only tears.” His entries also offer detailed descriptions on how this confusion continued even after the war ended. “Our investigation into the students’ fates has not been completed,” he noted on August 18. In all, the bomb killed 405 students and 10 teachers from the school.

According to Shintoku Girls’ High School, if documents held by the school will be used to hand down the memories of the atomic bombing, the school will make them available upon request, while giving suitable consideration to privacy issues.


Creating a digital file of school records
Extracts of the school records of the other four schools were included in The History of Hiroshima Prefecture: The A-bomb Documents, which was published by the prefectural government in 1972. Copies of the original records are kept at the Hiroshima Prefectural Archives. Records of the suffering experienced by students of Hiroshima First Municipal Girls’ High School in the aftermath of the August 6 blast are contained in the prefectural documents. In addition, Funairi High School has kept such documents as survey sheets, which were used to carry out a survey shortly after the number of deaths reached 666, and the register of the school’s first-year students at that time.

By the end of this year, Yasuda Educational Foundation plans to publish its 100-year history. This will include information on the 289 students of the school who were killed in the atomic bombing, based on the school’s daily record. This record has been held in a safe, but the quality of the paper has deteriorated greatly over the years and the paper is in danger of crumbling when the pages are turned. The school is looking into creating a digital file of the document.

In 1997, a document compiled by the former Hiroshima High School (now Hiroshima University) on how mobilized students were exposed to the atomic bombing was found at a second-hand bookstore in Shizuoka, located along the Pacific coast of central Honshu, Japan’s main island. The document was purchased and has been kept by the Hiroshima city government.

Shintoku Girls’ High School
The school’s daily record (August 6, 1945 to the end of December 1946), death notifications, and a document concerning a survey of injured mobilized students.