Hiroshima: 70 Years After the A-bombing: First director of museum devoted years to telling story of A-bombing; Dedicated to collecting and displaying materials 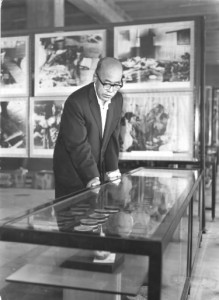 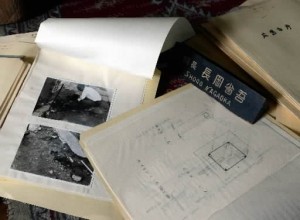 Shogo Nagaoka can be said to be the father of Hiroshima’s Peace Memorial Museum, which attracts more than 100 million visitors from Japan and abroad every year. Mr. Nagaoka, who died in 1973 at the age of 71, gathered materials that testified to the horrors of the atomic bombing and was named the museum’s first director in 1955. His years of struggle as seen in his dedication to the collection of materials from the atomic bombing and his research on the subject emerge from the large quantity of materials that were recently found.

Mr. Nagaoka came to the hypocenter area on August 7, 1945, the day after the atomic bombing destroyed Hiroshima. He sat down on a stone lantern at Gokoku Shrine (located in an area that later became the site of the municipal stadium in Naka Ward) and felt sharp pains as if he had been pricked by needles. Projections had formed on the surface of the stone when it had been melted.

It occurred to Mr. Nagaoka then that the bomb might have been an atomic bomb. He had studied geology in Manchuria (now northeastern China) and worked as a part-time instructor at Hiroshima University of Literature and Science (now Hiroshima University). He was as a member of the geology team of a task force dispatched by a Ministry of Education research council in October of that year to study the destruction caused by the atomic bombing. In that capacity, from the direction and angle of the “shadows” left by thermal rays on stones he calculated the location of the hypocenter.

He collected bottles, pottery, deformed tiles and other items from the burned-out city, put them in his knapsack and carried them to his home in the city of Otake, Hiroshima Prefecture, where they began to fill up his house. His wife Haruyo, who died in 1993 at the age of 91, worried about his exposure to radiation, but he was completely absorbed in gathering materials.

From 1948 Mr. Nagaoka continued his A-bombing survey under contract to the City of Hiroshima. “My mother ran a stationery store out of our home and supported my father’s efforts,” said Mr. Nagaoka’s son Renji, 73, a resident of Hiroshima’s Higashi Ward.

The Peace Memorial City Construction Law, which spurred the city’s reconstruction efforts, was promulgated in 1949. That same year the city set up an exhibition of A-bombing artifacts in a room in the Chuo Community Hall in Motomachi. The exhibition continued in the Atomic Bomb Museum, which was built next door in 1950.

But there was no budget for the project, and the director was the only employee. Mr. Nagaoka hired part-time workers, paying them out of his pocket. Renji cut up rough cardboard to make a panoramic model of the devastated city. While running the museum on a shoestring and with the cooperation of his family, in 1953 Mr. Nagaoka published a book on the destruction caused by the atomic bombing. The following year he put out a collection of photographs called “Hiroshima” in Japanese and English. Both books were published at his own expense.

The elevated Peace Memorial Museum opened in August 1955 in Peace Memorial Park, and Mr. Nagaoka was named its director. He had been formally hired as a public servant in the technical area in March of that year.

People who supported Mr. Nagaoka’s activities formed a group to help with the compilation of materials on the atomic bombing and helped Mr. Nagaoka gather documents. They also called on the public to provide personal effects. These efforts resulted in the basis of the museum’s collection. Mr. Nagaoka stepped down as director in 1962. He donated about 1,500 items from the A-bombing, sometimes referred to as “the imprints of the devil,” for display in the museum.

But, in an effort to “depict the misery of the atomic bombing more realistically,” in 1972 the city came up with a plan to display wax figures depicting people in the immediate aftermath of the A-bombing. Mr. Nagaoka opposed the plan saying, “The people of the world come to see actual materials on the A-bombing, not mock-ups.” The wax figures went on display in August 1973, six months after Mr. Nagaoka died of esophageal varices.

The collection of the museum, which will mark its 60th anniversary this year, comes to about 20,000 items, of which 420 are on display. The study of those materials, which Mr. Nagaoka once handled by himself, is now the task of six curators. After it is totally renovated in the spring of 2018, the museum will focus on the display of actual artifacts from the atomic bombing. Records concerned with the materials will delve into the inhumanity of the atomic bombing and convey it to visitors more fully. Mr. Nagaoka’s materials should serve as a solid foundation for the exhibits.