Hiroshima: 70 Years After the A-bombing: Basis of Peace Memorial Museum collection; 11,890 items collected and studied by first director given to museum 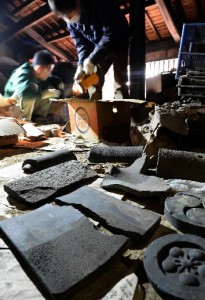 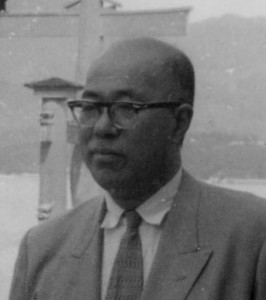 About 11,890 items related to the atomic bombing that were collected and studied by the first director of Hiroshima’s Peace Memorial Museum have been found in his former home in the Kuba district of the city of Otake, Hiroshima Prefecture. Shogo Nagaoka (1901-1973) devoted years to collecting and studying items for the museum. Mr. Nagaoka’s son Renji, 73, a resident of Hiroshima’s Higashi Ward, gave the materials to the museum on April 20 saying he hoped they would be useful. The museum, which will mark the 60th anniversary of its opening this summer, plans to study the items. “These materials will be valuable in conveying the museum’s history,” a spokesperson said.

Mr. Nagaoka, who was a geologist, began walking around burned-out Hiroshima the day after the atomic bombing on August 6, 1945, collecting rocks and other items that provided evidence of the calamity. With those items as the basis of its collection, the museum opened in August 1955 in what is now Peace Memorial Park in Naka Ward. Mr. Nagaoka served as director through 1962.

Among the items found at his home were: 610 tiles, bamboo and other items that show evidence of exposure to thermal rays; 8,370 photographs and negatives capturing horrible sights of people and the city that were acquired by Mr. Nagaoka and used in a collection of photographs called “Hiroshima” that was published in 1954 in both Japanese and English; about 1,230 items related to measurements of the site of the explosion and data Mr. Nagaoka collected on the amount of radiation found in various areas after Cobalt-60 was detected in the steel frames of buildings that had survived the atomic bombing in the early 1960s.

The materials also include lists of victims and survivors of the atomic bombing from neighborhoods and schools throughout the city as well as neighboring towns and villages. At the request of the Atomic Bomb Casualty Commission, which was established by the United States, from around 1948 Mr. Nagaoka visited the offices of various organizations and copied their records. He is believed to have compiled records on about 56,000 people.

The materials also offer insight into the Atomic Bomb Museum, the predecessor of the current facility. The museum was established next to the former Chuo Community Hall in Motomachi, Naka Ward, but the city has no records on the facility. The one-story, wooden facility cost 600,000 yen to build and had an area of 132 square meters. It opened on August 6, 1950. Materials on an exhibition on the A-bombing that was held in Tokyo in 1954 at the headquarters of the Japanese Red Cross Society were found along with a list of materials on an exposition on the rebuilding of Hiroshima that was held in 1958, when the museum was used as the “Nuclear Energy and Science Museum.”

The large quantity of materials were found by Renji and Mr. Nagaoka’s grandson, Kazuhiko Tagawa, 70, a resident of Asa Kita Ward, when they were cleaning out Mr. Nagaoka’s now-vacant residence in Otake. Some of the materials had been stored in the attic.

Renji said he decided to give all of the materials to the museum. “I will be happy if they allow people to learn more about the man who gathered materials on the A-bombing and researched it.”

Kenji Shiga, the museum’s current director and the 12th person to hold the post, said, “The museum got its start with Mr. Nagaoka’s activities. We are completely renovating the museum to focus on the display of artifacts such as the personal belongings of victims and photographs of the devastation, and I would like to make use of Mr. Nagaoka’s materials.”

Spotlight on predecessors who worked to tell the A-bombing story

Satoru Ubuki, a former professor at Hiroshima Jogakuin University, conducts research on the history of the atomic bombing. With regard to the recently discovered materials, he said: “Mr. Nagaoka’s ambition and his hard work led to the founding of the Atomic Bomb Museum. Today, when passing on the atomic bomb experience is more like an ‘event,’ we need to once again recognize the efforts of those who worked to convey the A-bombing experience to future generations and to people overseas early on and who have since been forgotten. Their efforts led to the wealth of historical materials on the A-bombing that we have today.”