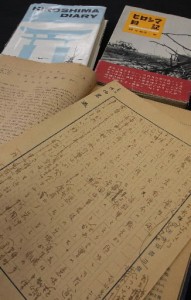 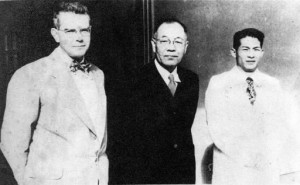 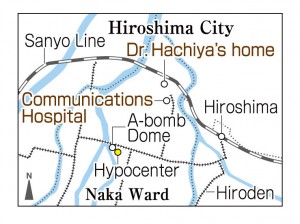 Hiroshima Diary, memoir of medical care under extreme conditions
"The hour was early; the morning still, warm, and beautiful. Shimmering leaves, reflecting sunlight from a cloudless sky, made a pleasant contrast with shadows in my garden as I gazed absently through wide-flung doors opening to the south. Clad in drawers and undershirt, I was sprawled on the living room floor exhausted because I had just spent a sleepless night on duty as an air warden in my hospital."

Hiroshima Diary, arguably the most widely-publicized account of the atomic bombing in the world, begins with these words. The book was translated into English and published by the University of North Carolina on August 6, 1955. The original Japanese version was published the following month by the Asahi Shimbun.

Survivors isolated, thought to have dysentery

The author of the book was Michihiko Hachiya (1903-1980), the director of the Hiroshima Communications Hospital. On August 6, 1945, Dr. Hachiya experienced the atomic bombing at the director’s official residence in present-day Higashi Hakushima-cho, Naka Ward, where the hospital was located. Covered in blood, Dr. Hachiya worked hard to carry out relief efforts with his staff. Although the hospital had discharged inpatients prior to the bombing, people wounded in the blast poured into the hospital in the aftermath.

Hiroshima Diary depicts the extreme conditions of the time, where 16 people died in one night and doctors mistook patients with vomiting and diarrhea brought about by acute radiation sickness as suffering from dysentery and placed them in isolation. The book also describes the rumors that swept the city, the frustration expressed by patients at the news of Japan’s surrender, the thriving black market which emerged in front of Hiroshima Station, and interactions with occupation forces.

After reworking his diary entries and titling them Hiroshima no Genbaku Zatsuwa (Stories from the Hiroshima A-bombing), Dr. Hachiya published his writing in a medical journal called Teishin Igaku (Communications Medicine) as a 12-part serial that began in November 1950. The idea then arose to translate Dr. Hachiya’s diary into English, proposed by a surgeon and medical consultant for the Atomic Bomb Casualty Commission (ABCC, now the Radiation Effects Research Foundation), which was established by the U.S. government. The man’s name was Warner Wells (he died in 1991 at the age of 77) and he was actively involved in visiting and communicating with doctors in Hiroshima.

Helping Dr. Wells with the English translation was Haruo Tsukifuji (he died in 2012 at the age of 89). Dr. Tsukifuji was born in Los Angeles, a second-generation Japanese-American who also used the English name “Neal.” When he was 13, he and his family returned to his father’s hometown of Fuchu, a town near the city of Hiroshima. He was also a medical doctor and an A-bomb survivor.

In that year, the Soviet Union conducted a successful hydrogen bomb test, which heightened tensions between the United States and the Soviet Union. Dr. Hachiya’s book entered the top ten in weekly sales of nonfiction books in the United States. In Europe, against the backdrop of the Cold War between East and West, translated versions were made one after the other. According to the Chugoku Shimbun of November 15, 1958, a total of 3.5 million copies were sold by that time.

“Dr. Hachiya was a director who was kind to patients. He didn’t show off his fame,” said Ichiro Shimizu, 89, recalling Dr. Hachiya’s humble nature. A resident of Himeji, Hyogo Prefecture, Dr. Shimizu was a physician at the Communications Hospital and helped Dr. Hachiya proofread the Japanese version of his book.

Royalties from the book and author’s fees for TV broadcasts in the United States and the United Kingdom totaled about 10,000 dollars (3.6 million yen at the time), which equaled the salary for two years for the Japanese prime minister. With these proceeds, Dr. Hachiya established the Hiroshima Yurin Scholarship in 1957, lending out money at no interest to help pay for the high school and university tuition of children impacted by the war. In all, 255 children benefited from this financial support.

After suffering partial paralysis to the right side of his body as the result of a stroke suffered in 1960, he wrote about his struggles with this condition. He retired as director of the hospital in 1966, then returned to his hometown in Okayama Prefecture. He passed away in the house where he was born at the age of 76.

Residents of Dr. Hachiya’s town, Tomihara, and nearby communities raised a monument to him in 2011. By this summer, they also plan to open a reference room at a local community center which will share materials related to Dr. Hachiya’s life and work.

In 1995, a portion of the outpatient building of the former Hiroshima Communications Hospital was turned into an A-bomb museum, and now displays the original Hiroshima Diary manuscript. Noboru Saeki, 73, a resident of Minami Ward, Hiroshima, entrusted the document to the museum in 2000. Mr. Saeki was a classmate of Dr. Hachiya’s only son. (The son has passed away.) When Mr. Saeki visited Dr. Hachiya’s home with a copy of the book, he was given the manuscript. Mr. Saeki donated it to the museum with the hope that “people will know about Dr. Hachiya’s achievements, which are being forgotten.”

Even today, reactions to Hiroshima Diary are posted online at the website of a leading U.S. retailer. Both Dr. Hachiya and his book have become well known around the world.