Hiroshima: 70 Years After the A-bombing: 170 meters from the hypocenter, Eizo Nomura describes devastation in memoir 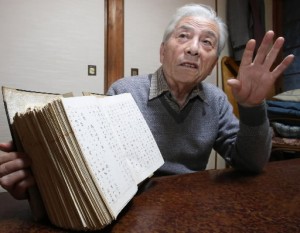 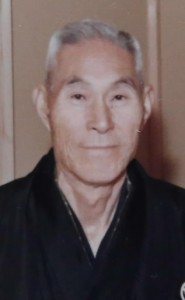 National Peace Memorial Hall to add A-bomb account to its collection
Eiso Nomura (1898-1982) miraculously survived the atomic bombing of Hiroshima, despite the fact that the explosion occurred in the air right above him. It has been learned that Mr. Nomura wrote a memoir, which has been preserved by Mr. Nomura’s third son Hideo, 80. This account is a newly-found record of the devastation of the hypocenter area, and the Hiroshima National Peace Memorial Hall for the Atomic Bomb Victims hopes to add it to its collection of A-bomb accounts.

On August 6, 1945, Mr. Nomura was in the basement of the Fuel Hall (now, the Rest House in Peace Memorial Park), about 170 meters southwest of the hypocenter. He was a staff member of the prefecture’s Fuel Rationing Control Union. Of the 37 employees working there that day, eight were able to flee the concrete building after the bombing. But Mr. Nomura eventually became the sole survivor.

Waga Omoide no Ki (My Memories) was written on 800 pages of manuscript paper. Starting when he was 72, Mr. Nomura spent several years writing about his life. In a chapter titled “Atomic Bombing,” he described his experience of the A-bomb attack.

He gives a vivid description of the conditions around the hypocenter. After escaping from the building, he thought he “heard a baby cry for a short time around the A-bomb Dome,” located across the Motoyasu River. In a nearby air-raid shelter, he “saw four or five men and women lying on the ground, but no one moved or said anything.”

Mr. Nomura was concerned about the intensifying nuclear arms race and the future. Though he escaped death, he considered, “In a future world war, it will be difficult for one in 37 people to survive. The entire earth will be covered in radiation, and even strong and healthy people will eventually die of illness.”

Mr. Nomura contributed his testimony entitled “In the Downpour at the Hypocenter,” when the City of Hiroshima solicited A-bomb accounts in 1950. In 1972, the former Research Institute for Nuclear Medicine and Biology at Hiroshima University found that, of those who were within a 500-meter radius of the hypocenter, 78 were still alive. He was determined to have been closest to the hypocenter. Until his final years, he continued to share his experience.

Based on the account he wrote in 1950, he then expanded his description of the devastation in his memoir. This was prompted by the fact that, back in 1950, he was unable to write freely under the occupation of the Allied Powers, as well as his rising sense of urgency over the arsenals of nuclear weapons still existing in the world.

The National Peace Memorial Hall hopes to add Mr. Nomura’s memoir to its collection of A-bomb accounts. “We hope to obtain even a reproduction of this important document so that we can show it to the public,” an official from the hall said. Hideo intends to agree to this request.