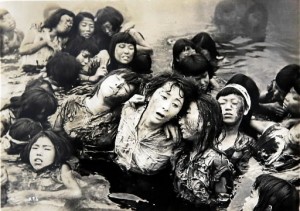 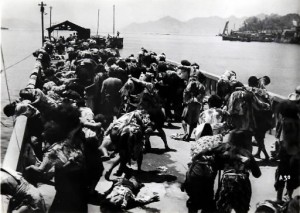 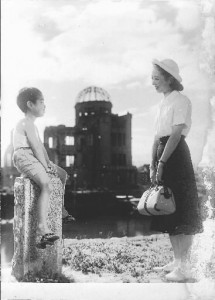 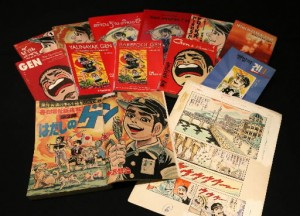 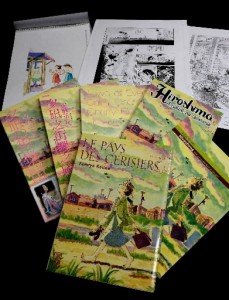 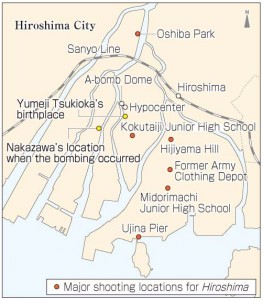 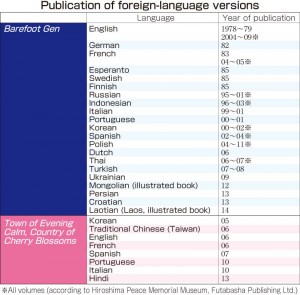 Creative expression stirs sympathy
What happened to the human beings on the ground when an atomic bomb exploded above the city of Hiroshima on August 6, 1945? How did they survive such an ordeal? In a range of ways, people have described the unprecedented tragedy and the wishes they came to have afterward. Particularly when it comes to popular culture, movies and manga have contributed to building up images of the atomic bombing and calling up memories of this catastrophe. Since these works stir the imagination, they are capable of conveying messages across national borders and generational boundaries. On the other hand, they have always been subject to political pressure and varying interpretation. This article explores the creation of A-bomb movies and manga stories, the friction they have endured in the world, and the potential they hold.

Movies: Hiroshima and Children of Hiroshima

Citizens support re-enactment of suffering caused by the A-bombing

Despite having just been discharged from the hospital, actress Yumeji Tsukioka, 92, provided written responses to our questions.

Hiroshima, a film directed by Hideo Sekikawa, was released in 1953. Ms. Tsukioka played the part of a teacher who fell victim to the atomic bombing along with her female students. She wrote: “As I’m from Hiroshima, l wanted to be of some help in one way or another. But I had an exclusive contract with the studio Shochiku so it was difficult to appear in a movie produced by an independent film company.” She negotiated directly with Shiro Kido, the vice president of Shochiku, and obtained permission to perform in the movie for no fee.

Ms. Tsukioka’s birthplace was the home that housed their family drugstore, called “hinotsume,” located in Ote-machi (now part of Naka Ward). She went to Fukuromachi Elementary School and Hiroshima Prefectural First Girls' Middle School (today’s Hiroshima Minami Senior High School) before entering the Takarazuka Music and Revue School (now Takarazuka Music School) in 1937. After the war, she became one of the most popular movie stars of the Shochiku stable.

At this time Japan was occupied by the Allied Powers and all films were subject to censorship. Depictions of the horrific damage caused by the atomic bombings were not permitted. After the occupation ended, Children of Hiroshima was the first A-bomb film shot in Hiroshima. It was released in 1952.

This film was based on the 1951 book Children of the Atomic Bomb, a collection of accounts of the atomic bombing written by children and compiled by Arata Osada, a professor at Hiroshima University. The movie was written and directed by Kaneto Shindo, a Hiroshima native who established the Kindai Eiga Kyokai company. Conveying the horror of the bombing, the movie features Nobuko Otowa in the role of a teacher who visits her students in Hiroshima seven years later.

The film was a success and was screened at the 1953 Cannes Film Festival. But diplomatic papers released in 1989 revealed that Japan’s foreign ministry had sent a telegram which lobbied for the film not to receive any awards.

Meanwhile, the book Children of the Atomic Bomb was also being made into a second film. The movie Hiroshima was completed with financial support from the Japan Teachers Union. In Professor Osada’s own words, the film “boldly depicts the mass slaughter of the atomic bombing.”

The shooting took place at 24 different locations in Hiroshima, starting in May 1953. A total of 88,500 extras of all ages helped re-create the hell-like scenes.

Yuriko Hayashi, 78, contributed her account to the book and also played a student in the film. She said, “We smeared a mixture of mud and ink on our faces and went into the river. I remember having a vivid flashback of that day.” Tadayuki Kusunoki, 90, was a teacher at Ujina Junior High School. He said, “People were willing to donate money or military clothes for the film when asked.”

The Hiroshima city office and local businesses such as Hiroshima Electric Railway and Toyo Kogyo (now Mazda Motor Corporation) also lent their full support to the production. Ms. Tsukioka, Isuzu Yamada, Eiji Okada, and other well-known movie stars performed in the film, and it was completed in August. But no movie company would agree to distribute it nationwide.

According to the Chugoku Shimbun, in its edition dated September 6, 1953, this was because the film was deemed “too anti-American.” An armistice agreement had just been made for the Korean War, with the United States declaring the possible use of nuclear arms. Tadao Sato, 84, president of the Japan Institute of the Moving Image, believes people at the time were still reacting to the recent period of Allied censorship.

Hiroshima was screened as an independent film. In 1955, it was shown in New York and received an award for a feature-length film at the Berlin International Film Festival. However, some viewed the movie as a political film, because it was supported by the teachers’ union. As a result, it was not shown in many theaters. In 1984, the teachers’ union entrusted the movie’s distribution to a Tokyo-based film company, which created a DVD of the film in 2005.

The film Hiroshima has long languished in obscurity, but it is now starting to see the light of day. Ippei Kobayashi, 67, a resident of Komae, Tokyo, whose father was the director’s assistant, began showing the film through an independent channel in 2008. He and students at Ritsumeikan University have produced an English version of the DVD and have been calling on citizens’ groups in Western countries to screen the movie.

Mr. Sato said that both Hiroshima and Children of Hiroshima, in which crowds of A-bomb survivors create a powerful visual impact, could not be produced today. He added, “I hope people will pursue an opportunity to see them.”

At the time she appeared in these films, the actress Yumeji Tsukioka wrote the following words: “Regrettably, many friends of mine died in the atomic bombing. Their deaths were re-created in these movies. It is my sincere wish that each and every one of us, including me, will always hold this antiwar sentiment.”

Hiroshima and Children of Hiroshima are classics, but can always yield new understandings.

Story of a boy’s life translated into 21 languages

In his book Watashi no Isho (My Note of Farewell), the manga artist Keiji Nakazawa (1939-2012) wrote that Gen, the main character of his series Barefoot Gen, was a stand-in for himself. As a young boy, Mr. Nakazawa was about 1.3 kilometers from the hypocenter when the atomic bomb exploded. His father, sister, and brother were killed in the bombing. Later, he went to Tokyo on his own to become a manga artist. In 1973, he finally saw Barefoot Gen appear in a major weekly magazine as a serial.

Barefoot Gen was the story of a boy who lived a courageous life in Hiroshima after the city was devastated by the atomic bomb. But the serial had to be suspended the following year when the number of pages in the magazine was reduced in the oil crisis of that time. After the story reappeared in print, the publishing company went bankrupt. Finally, in 1987, the entire tale was completed. Though a story about the atomic bomb seemed unlikely to be a commercial success, the 10-volume manga has sold more than 10 million copies to date.

The success of Barefoot Gen goes well beyond this, too. Alan Gleason, 63, an American translator who lives in Tokyo, said, “This was the first full-length Japanese manga to be translated into English.” Mr. Gleason was among those who introduced Barefoot Gen to the rest of the world in 1978.

Mr. Gleason came to know the manga story in 1976. A fellow Japanese editor brought a copy of Barefoot Gen when they took part in a peace march across North America in response to the nuclear arms race between the United States and the former Soviet Union. The participants from various countries were shocked by the sight of Mr. Nakazawa’s illustrations. This led to the birth of Project Gen, launched by 10 young Japanese and Americans. They translated the first four published volumes of the series into English and printed these books at their own expense. Later, publishers in San Francisco and Philadelphia issued the Barefoot Gen series.

A Kanazawa-based citizens’ group then assumed the name and work of Project Gen and, starting in 1995, translated all 10 volumes of the series into Russian. One of the members of the group is Namie Asazuma, 72, a board member of an association which promotes exchange between Russia and Japan. They also pursued an English translation of the books, an effort which began in 2004 and lasted six years. They published 3,000 copies of each volume of the English version.

“We can’t be oblivious to this dark period in history,” said Ms. Asazuma. Sharing letters from readers abroad, she stressed that the landscape surrounding nuclear weapons could change if the story of Gen is recognized as a tragedy that might happen anywhere in the world. Project Gen has begun working on revised editions of the Russian version.

In South Korea, where a tough stance is taken against Japan’s responsibility for the war, the whole Barefoot Gen series was published in 2002. Each volume has sold more than 15,000 copies, exceeding expectations. Kim Sonhi, 68, translated the series into Korean. The second-generation Korean, a resident of Osaka, said, “Though there is a deep-rooted belief that the atomic bombing liberated the Korean people from colonial rule, an antiwar sentiment has also become universal.”

Still, relations between Japan and other countries can make publishing the books a challenge.

Hiromi Bando, 67, a resident of Nagoya, began translating the story into Chinese with colleagues when she worked at China Radio International in Beijing. The translation work was completed last year, but it is unclear whether they can obtain permission to publish it in China. They are now seeking a publisher in Taiwan. “The translators have been driven by Gen’s forward-looking attitude despite facing adverse circumstances,” Ms. Bando said.

Some municipal boards of education in Japan have restricted or banned access to Barefoot Gen at elementary and junior high school libraries, because “the manga’s violent scenes are harmful to children.” Still, the story continues to cross national borders. Translated into 21 languages to date, Barefoot Gen is now being translated into Arabic by a professor at Cairo University in Egypt.

Town of Evening Calm, Country of Cherry Blossoms, a manga story created by Fumiyo Kono, 46, has also been read in various parts of the world. Ms. Kono is originally from Nishi Ward, Hiroshima, and now lives in Tokyo.

The story is the lyrical account of a woman who lives in Hiroshima ten years after the atomic bombing and what unfolds later for her relatives. The manga series has earned Ms. Kono several awards including one by the Agency for Cultural Affairs. According to its publisher, 400,000 copies have been sold to date. It has been translated into eight languages, and each version has sold about 10,000 copies.

“I wrote the story,” explained Ms. Kono, “with the hope that readers will feel as if it were set in a town where their friends live. I have come to think that those of us who have no direct experience of the atomic bombing have a duty to hand down the accounts of this event.”

Misayo Nakazawa, 72, the widow of manga artist Keiji Nakazawa, assisted with his work by tracing his lines with a pen. Ms. Nakazawa, who lives in Tokorozawa, Saitama Prefecture, said Barefoot Gen has been accepted in other countries because “People are connecting to my husband’s frank impressions.”

These expressions of Hiroshima move the hearts of people around the world not only because they depict the tragedy of the atomic bombing but because they stir sympathy, too.