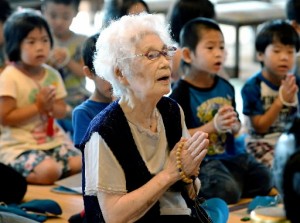 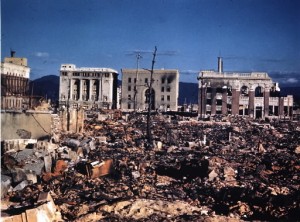 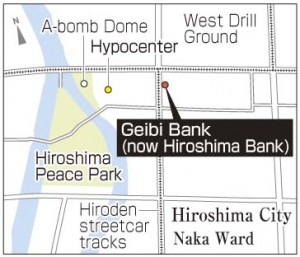 For many years Akiko Takakura, 88, has carried out the duties of the head priest’s wife at Hoonji Temple in Asa Kita Ward. Though her son took over as head priest 19 years ago following the death of her husband, she has continued to oversee the Monday morning visits to the temple by children from the nearby Kameyama Midori Nursery School. The children sing Buddhist hymns and listen to stories.

During their visits Ms. Takakura tells the children that “ants and pill bugs have only one life too.” “If they learn the value of life from a young age, they will realize that war is wrong,” she said. This educational philosophy is based on her atomic bombing experiences.

On August 6, 1945, Ms. Takakura (nee Ryutani) was on the first floor of the headquarters of Geibi Bank (now Hiroshima Bank) in Kamiya-cho (now part of Naka Ward). The ferroconcrete building was located about 260 meters east of the hypocenter. Then 19 years old, Ms. Takakura worked in the exchange department. She was wiping her desk off at the time of the atomic bombing. “There was a white flash, and I was blown to the floor on my left side,” she said. She came to upon hearing cries for help from her coworker, Kimiko Usami, who was one year younger.

The two of them managed to get out onto the avenue in front of the building, which was filled with charred and bloody bodies. “The fingers on the body of one man had burned down and blue flames were coming from his fingertips,” she said. “I’ll never forget that.”

The two women continued on to the West Drill Ground (near the current prefectural offices). As darkness set in they felt cold and covered themselves with a piece of corrugated tin to try to stay warm. Pleas for help echoed throughout the night. “Help me. I’ll give you some rice if you do,” one person said.

The next morning a man who had come into the city in search of family members saw the two women and said, “Only a lot of strangers are still alive.”

“He sensed the fragility of human life. And he was probably so desperate that he couldn’t help but feel that way,” Ms. Takakura said.

Luckily, the two women were found by Ms. Usami’s father, who lived in Ujina-cho (now part of Minami Ward). He carried them home on a two-wheeled cart. Ms. Takakura’s mother came to get her, and she returned to her hometown on Kurahashi Island (now part of Kure) on August 10. Ms. Usami died less than a month later.

Ms. Takakura had more than 100 cuts and scratches all over her body, but under her parents’ care, she gradually recovered and looked after the children at the nursery school at Saihoji Temple, her family home. Upon marrying at 34 she assumed the duties of the head priest’s wife at Hoonji Temple and continued her child care work.

In 1974 broadcaster NHK issued a call for pictures depicting A-bombing experiences. Ms. Takakura submitted a drawing of the fingertips with the blue flames, an image that was etched in her memory. Her picture attracted the attention of the Hiroshima Peace Culture Foundation, and at the organization’s request at the age of 65 she began talking to visiting schoolchildren about her A-bombing experiences, an effort she continued for more than 10 years.

When talking to the students she always mentioned the blue fingertips she had drawn. “With those fingers, the man had probably picked up his children and turned the pages of books,” she told them. She wanted the students to get an idea of the significance of each of the lives lost in the atomic bombing. She also hoped they would give some thought to the postwar lives of those who had survived.

When she was 45 Ms. Takakura had surgery to remove a spinal tumor. Two years ago an abnormality in her blood-forming stem cells was discovered, and she was diagnosed with myelodysplastic syndrome (MDS), a condition that often leads to leukemia. Research has shown that there is a higher rate of MDS among survivors who were within 1.5 km of the hypocenter, but Ms. Takakura’s request for atomic bomb disease certification was rejected at the end of last year and she has had to reapply.

Why do nuclear weapons still exist?

“As long as I live I will suffer on account of the A-bomb. There will be no relief until I die,” Ms. Takakura said matter-of-factly. “Why were those weapons made and why do they still exist? We aren’t as smart as human beings ought to be.”

Twelve of those who were within 500 meters of the hypocenter at the time of the atomic bombing are still alive. Most of them say they feel they simply survived for one reason or another. Even though their lives were spared, they lost family members in the A-bombing and have suffered from various kinds of cancer. They have battled absurd hardships. Their stories truly reveal how inhumane nuclear weapons are.

(This is the final article in this series.)