Hiroshima: 70 Years After the A-bombing : Records of medical exams 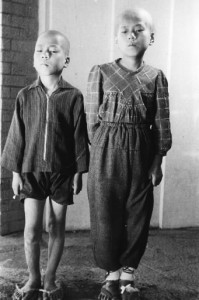 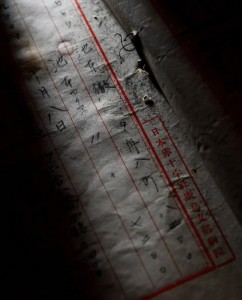 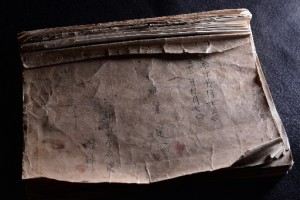 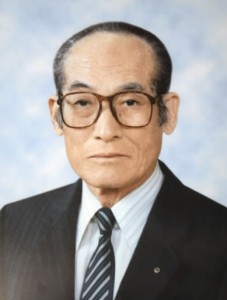 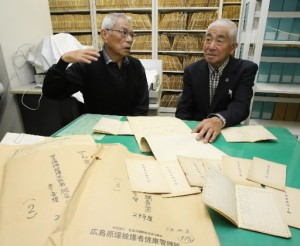 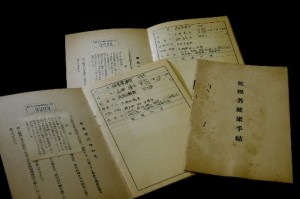 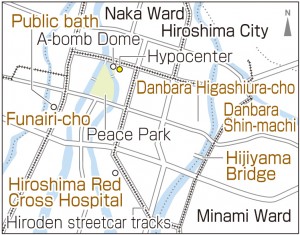 A-bomb diseases: Challenge of providing treatment
The atomic bomb that exploded over Hiroshima on August 6, 1945, continues to cause mental and physical suffering to the survivors in the form of the so-called “A-bomb diseases.” Treating conditions resulting from the effects of the A-bomb’s blast, thermal rays and radiation was a challenge at first. Victims received no aid from the central government until the Atomic Bomb Medical Relief Law was enacted in 1957. How did A-bomb survivors and physicians cope with the A-bomb diseases during this gap of more than a decade? This article takes up that question, looking at records of the treatment provided to survivors in the immediate aftermath of the A-bombing and in the ensuing years.


Brother and sister with hair loss
White blood cell counts back to normal on October 6, 1945
But blood cells not fully recovered from damage
Last fiscal year more than 1.38 million people from Japan and abroad visited the Peace Memorial Museum in Hiroshima. Many visitors pause in front of a photograph titled “Brother and sister suffering from hair loss.” The label states that the photo was taken in early October 1945. The picture has been used in numerous books to document the effects of acute radiation sickness.

Their names are not given, but the brother and sister are Toru and Aiko Ikemoto. At the time of the A-bombing, Toru was 7 and Aiko was 9.

Records of the children’s white blood cell counts made at the time they were photographed are included in a notebook titled “White Blood Cell Counts” found in the specimen room in Building No. 6 at the Hiroshima Red Cross Hospital & Atomic-bomb Survivors Hospital. The children’s counts are noted under the heading for October 6, 1945.

Aiko’s white cell blood count was 7,200. Her brother’s was 8,200. A count less than 4,000 white blood cells per cubic milliliter of blood constitutes leukopenia, an abnormally low number of white blood cells. So despite their hair loss, the children’s white blood cell counts had returned to normal levels.

Their parents and siblings have also since died. Hiroshima resident Mieko Ikemoto, 73, widow of the third son in the family, agreed to be interviewed about the deaths of Aiko and Toru. She went to the family’s Buddhist altar and removed the family’s victim’s certificate dated August 7, 1945 and other items that she had inherited.

In 1945 the six-member family was living in Funairi-cho, Naka Ward. On August 6, the children’s mother, Tameko, 38, was at Hiroshima Station with her youngest son Akira, 4, when the atomic bomb was dropped. They were on their way to see the eldest son, then a 12-year-old first-year student at the junior high school affiliated with Hiroshima Higher Normal School. He had been mobilized as an agricultural worker in the village of Hara (now part of the city of Higashi Hiroshima). Tameko’s husband, Tomoichi, 40, was on his way to the station by bicycle. He turned back and went in search of his two children who were students at Kanzaki National School.

According to Volume 4 of “Record of the A-bomb Disaster” published by the city, children living in Funairi-cho who had not relocated outside the city to escape air raids attended classes at a nearby public bath rather than at the school. A pre-war phone book indicates that the bath was located in Funairi-cho about 1 km from the hypocenter of the A-bombing.

Ms. Ikemoto said Tameko told her that about a year after the A-bombing Aiko and Toru began to regain their health.

Toru fell ill in the spring of 1949, when he was in the sixth grade, collapsing after returning from a school field trip. At a time when the prime minister’s monthly salary was 40,000 yen, Toru’s parents came up with 50,000 yen for his medical expenses and also got him a costly shot of penicillin. But Toru died in June at the family home in Ote-machi (now part of Naka Ward).

Aiko underwent tests conducted by the Atomic Bomb Casualty Commission established by the U.S. (now the Radiation Effects Research Foundation). After graduating from Motomachi High School, she went to work for the Chugoku Electric Company and married at the age of 22. Two years later she gave birth to a son. But she died in January 1965 at Hiroshima University Hospital.

“Although their hair came back, many people’s blood did not return to normal and they died,” recalled Fumio Shigeto in “Human Beings after the Atomic Bombings.” Dr. Shigeto noted that with only two cytometers for measuring white blood cells he was pressed to treat sufferers of A-bomb diseases. Dr. Shigeto later served as the first director of the Atomic-bomb Survivors Hospital. He died in 1982 at the age of 79.

Survivors began to develop leukemia about two years after the atomic bombing, and the number of cases rapidly increased after that. The incidence of leukemia was first made public by Takuso Yamawaki, a doctor at the Hiroshima Red Cross Hospital in a presentation to the Japanese Society of Hematology. He was not able to present his findings until 1952, when the Allied Occupation of Japan ended. (Dr. Yamawaki died in 2006 at the age of 84.)

In a matter-of-fact manner Ms. Ikemoto recounted what she’d heard from her in-laws, whom she cared for in their final years. “Toru’s spinal cord was apparently affected,” she said. “Aiko’s right thigh was very swollen. Her parents stayed by her bedside to the end. Right up until her death they were chagrined that she had breathed in ‘fumes’ from the atomic bomb.”

Tomoichi and Tameko ran a boarding house for junior and senior high school students at their home in Minami Senda Nishi-machi. A fire there in 1989 destroyed Aiko’s precious bridal costume. Ms. Ikemoto put the A-bombing victim’s certificate, which is believed to have belonged to Tomoichi, and the photograph of Aiko and Toru with no hair into the Buddhist altar.

The photograph offers proof that the two children survived despite being stricken by A-bomb diseases. Tomoichi lived to the age of 90, Tameko to 92.

“That’s definitely us,” brothers Seiso, 81, and Shigeo Yamada, 74, agreed as they looked carefully at records bearing their names and describing their symptoms. The eight-page records on postcard-sized paper note the results of blood tests the two underwent on August 30, 1956.

Seiso, a first-year student at Koryo Junior High School, was working at the east end of Hijiyama Bridge when the atomic bomb was dropped on August 6, 1945. He had been mobilized to tear down buildings for fire breaks. In the section of his health record for “External Injuries and Burns” it says: “Left side of face, left arm, left side of abdomen.” “I ran home, and when I got there I was so badly burned that my mother didn’t recognize me. I don’t know how she got it, but I recall her putting vegetable oil on my burns.” Shigeo’s chest was cut by flying shards of glass at the family home in Danbara Higashiura-cho.

Seiso’s health record indicates that he also suffered from acute effects of radiation such as vomiting and diarrhea. Eight of the nine members of the Yamada family experienced the atomic bombing. The remains of 14-year-old Shizue were never found.

Seiso said the family struggled to survive for the next 10 years. Their parents sold their land and rental housing, and Seiso peddled grilled rice crackers. Many survivors who had lost everything in the atomic bombing, moved to the Danbara area, which had escaped the fires. The brothers agreed that they had been able to bear the tough times when people everywhere were poor but the fact that many people died suddenly was ominous.

Dr. Nakayama opened a practice in Danbara Shin-machi in 1946 upon his return home after serving as a military physician. “He was a taciturn man who was single-minded in his devotion to his work,” Sumimasa Nakayama, 63, a psychiatrist, said of his father.

In January 1953, when it was no longer taboo to discuss the A-bombing, doctors in Hiroshima established Gentaikyo in cooperation with the prefectural and city governments and began conducting group health checks for A-bomb survivors at Hiroshima Municipal Hospital. Starting in 1954 the group health checks were conducted on a monthly basis.

Dr. Nakayama, who served as executive director of Gentaikyo, was in charge of the internal medicine portion of the check-ups. He stressed the importance of the exams, saying they were necessary to allay the concerns of survivors, who faced discrimination in marriage and employment, and for the early detection of disease. Volume 2 of a history of the Hiroshima City Medical Association states: “As it stands now, it is impossible, in terms of both economics and facilities, for Gentaikyo to [conduct the health checks].” So the medical association got involved in the program, starting with the Danbara area, where the health checks were being given. The central government provided no assistance, and Gentaikyo relied on a fund-raising campaign to cover its expenses. The fund drive was launched by the broadcasting company NHK, which promoted it as a mutual aid effort to benefit A-bomb survivors

Patients’ medical records of their conditions at the time of the A-bombing through their later symptoms were recorded on a one-page Atomic Bomb Survivor’s Survey Form. The contents of this form were entered into the health record book, which was assigned a number and then given to the A-bomb survivor. The back of the record book said: “This record book entitles you to free health checks and tests anytime, anywhere.”

Under this system if a problem was found, survivors could undergo treatment after gaining the approval of the Gentaikyo, making it the precursor to the assistance later offered to A-bomb survivors.

In a 1979 panel discussion, Dr. Nakayama talked about the early years of treatment for A-bomb diseases and stated that patients had been treated for free with the approval of Gentaikyo. Dr. Harada described the sentiments of the doctors who treated the survivors saying, “We just felt we had a responsibility to do it.”

This spring a redevelopment project in the Danbara area was finally completed after 40 years. “Most of the residents who had experienced the A-bombing had died or moved away, so the area had changed a lot,” Seiso said. He said he never fails to take advantage of the semi-annual check-ups offered to A-bomb survivors. Twelve years ago he was diagnosed with colon cancer. Although the Danbara area has completely changed, the “postwar era” of the A-bomb survivors goes on.