6. Compensation for Victims of Hanford 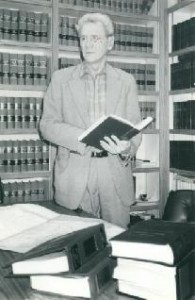 In Seattle we met Tom Foulds, the lawyer representing the victims of Hanford in a case to be brought before the Spokane Federal Court. Foulds's days were filled with finding witnesses to give evidence, the aim being to obtain compensation for suffering caused by exposure to radiation. In his office in central Seattle, the files on Hanford are steadily piling up.

Since the fall of 1988 the New York Times and a number of other major papers had published several articles dealing with the issue of contamination caused by nuclear weapons factories across the United States, such as those at Rocky Flats, Colorado, and Savannah River, South Carolina. Foulds's interest in the articles at that time was mainly of a personal nature: his wife, Jackie, died of leukemia in 1976 at the age of forty-eight. The couple had lived in Nevada at one time, in a region which, unbeknown to them, was contaminated by radiation from nuclear testing. The thought that his own wife may have been a victim of radiation is a driving force in his efforts to help the people of Hanford. At the beginning of 1989, when a patient from Hanford suffering from a radiation-linked illness asked if it would be possible to sue the complex and obtain compensation, he decided to take on the case.

Foulds was surprised at the number of people he encountered in the Hanford area with thyroid conditions, cancer, and leukemia. His surprise soon turned to anger. The authorities seemed oblivious to the extent of the suffering; there was no specialized medical treatment provided, and of course no compensation of any kind. "Even if nuclear weapons are essential for national security, as the army would have us believe, there is no possible justification for sacrificing the people of the nation just for some military aim. Willful neglect is the order of the day here—there's no regard for democratic principles whatsoever."

There was one major hurdle to overcome before the case could be heard, however. By law, the U.S. government cannot be taken to court over a matter of national security or foreign policy, forcing Foulds to search for a means of avoiding this legal obstacle. After a careful examination of the documents made public by the DOE, he found a loophole. Hanford operated by contracting out to private businesses. One of these contracts contained a clause which forbade "any injury to the local residents." Foulds therefore made the subcontractors the target of his demands for compensation.

"The complex poured out at least 530,000 curies of radiation over a thirteen-year period, and I have proof that it is still doing this. The plant is clearly liable for the damage it has caused by continuously discharging dangerous substances into the environment."

Part of Foulds's task has been to gather statements from experts to support the case. Professor Allen B. Benson, of Spokane Falls Community College, an expert on iodine-131, told Foulds that "the effects of iodine-131 on children and pregnant women were well known at the time of the experiment." Dr. Thomas Hamilton of Seattle, known for his research on the problems faced by victims of radiation in the Marshall Islands, stated that "the consequences of exposure to iodine-131 are being felt in Hanford, but the contamination was kept secret for so long that there is a huge vacuum in the medical records there." According to Foulds, the plaintiffs number over ten thousand. At present there is no law in the United States which provides financial relief for suffering caused by exposure to radioactive substances from a nuclear facility. The residents of Hanford are pinning their hopes on this case, as are victims of radiation in other parts of the country.