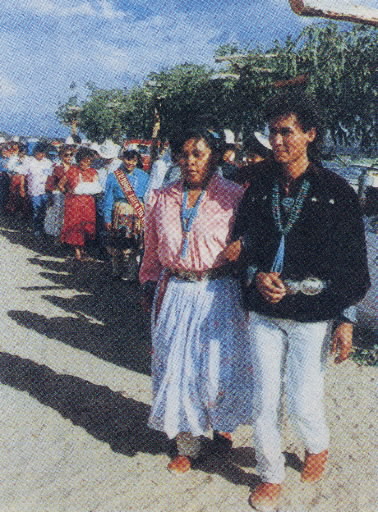 Indian reservations stretch from Arizona into New Mexico, across an expanse of land famous for its part in the history of the old West, as illustrated in countless Westerns. But the area also has another story to tell, one which has never been made into a movie: the story of uranium mining and radioactive contamination. We visited some forgotten villages in this area where native Americans are yet again facing upheavals in their lives.

The dancing started as the sun began to sink toward the west. Men and women linked arms, chanting as they danced with stately grace. We were in Church Rock, New Mexico, at the source of the Puerco River, a tributary of the Colorado. An Indian prayer meeting had just begun. The people were asking the gods to bring back the pure, fresh water they had once enjoyed. Mingled with their prayers was resentment toward those who were responsible for the contamination of the river and their wells ten years previously.

On July 16, 1979, just after five o'clock in the morning, a dam holding waste material from the neighboring uranium refinery burst, causing a huge mass of mud to pour into the hundred-foot-wide Puerco River. Johnny Arviso, a local farmer, recalled that "the mud came at us in waves." However, the real horror started after the filthy waters had receded.

"The bottom of the river was turned to mud--it stank like a mixture of oil and acid," Arviso continued. Naturally the mud was radioactive. The company mobilized its employees in an effort to clean up, but the scale of the accident was too large. Over ninety thousand gallons of mud and eleven hundred tons of tailings had escaped. Following the accident, high concentrations of radium, uranium, and other substances were detected in river and well water, making it too dangerous to drink. Since then a pipe has brought water from a lake twenty-five miles away, and from the outlet it is carried in buckets to the seven hundred households in the river valley. However, this does not guarantee total safety; livestock has become contaminated by drinking water from the river, posing a considerable risk to local consumers.

Uranium mining began at Church Rock in the late 1940s, and the hills in the area are dotted with abandoned mine shafts. The dam accident in the mountains, which the tribal elders described as "a desecration of the home of the gods," was one of the worst in the history of American nuclear development. The reservoir was found to have been overloaded in defiance of warnings from the state government.

A recent geological survey revealed that radiation levels are still from ten to one thousand times higher than the "safe" limit. "Because we're Indians they thought they could get away with not looking after that dam properly," the deputy mayor of the locality, Ted Silversmith, told us angrily. "The United Nuclear Corporation closed the refinery, but that won't bring our water back." He added that although the area had got attention because of the accident, there were places much worse off. He was referring to a region known as the Four Corners, where the desert is a maze of abandoned mines.