2. Contamination of the Four Corners 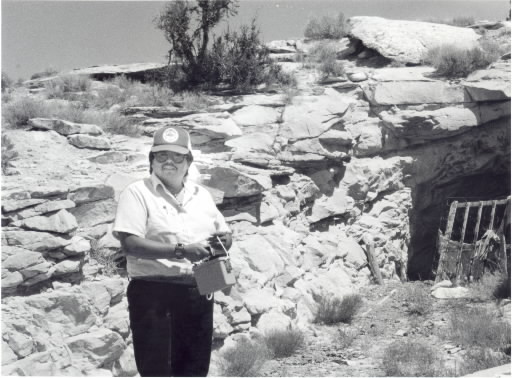 The Four Corners is where the states of New Mexico, Utah, Arizona, and Colorado converge. Its main residential center is Shiprock, and it was there that we met Perry H. Charley, a Navajo Indian. Charley is presently investigating the emission of radioactive substances from the old uranium mines that are scattered around this vast area of rocks and sand.

It was hard for us to believe that such a danger could exist in a place where nature appears to dominate completely. "I'd like to think that, too," Charley said in reply. "But I'm afraid I can't." He took us across the border into Arizona for about twenty miles until we reached the village of Tsee Tah. There we left the highway and turned onto a gravel road that wound up into the mountains. The car crawled precariously up to a height of over three thousand feet, where we stopped and got out.

Studding the mountainside were holes six to ten feet in diameter. Our guide walked around slowly, holding a geiger counter. Near the holes were piles of rocks heaped haphazardly on top of each other. As Charley approached one of the holes, the counter began to emit a beeping sound. The needle pointed to 15 microroentgens. He walked a little closer. The needle reached 250 next to a pile of rocks, which looked as if a yellow powder had been sprinkled over them.

"It's quite safe if you only walk around here from time to time," Charley said. "But if you lived here it would be pretty bad." He showed us a hole surrounded by wooden railings—the locals sometimes used the disused holes as sheep pens.

The uranium mines dug into the side of the mountains are still full of radon gas. Charley has confirmed this to be the case for 176 of the mine shafts he has surveyed since October 1988. This figure is over five times the official number of thirty registered by the DOE. "I shudder to think what the figure would be for the whole of the Four Corners region," he told us.

Originally, radium was mined in this region for use in pottery glazes. However, things started to change in the latter part of the 1940s. In 1949 the Soviet Union staged its first successful atomic bomb test, signaling the start of the arms race. The desperate search for uranium was on.

Uranium was found in Four Corners, right in the center of the Navajo reservation. The area was swamped in a "uranium rush" the likes of which had never been seen before. Mining companies dug out the uranium, starting with that easiest to reach, and transported it to seven refineries built close by, where it was processed. At its peak, the Four Corners region is said to have accounted for twenty-five percent of the uranium used in the production of nuclear weapons.

In the early 1970s, however, the price of uranium plunged on the world market, and Four Corners lost any competitive edge it previously had. One by one the mines were closed. All that was left were countless holes in the mountainsides and huge heaps of tailings. Most of the mines were simply abandoned, as we had seen, with no measures taken to prevent damage to the environment.

The village of Tsee Tah is home to twenty-seven families, who make a living at the foot of the mountains by raising sheep, horses, and cattle. When the wind blows the village is covered with radioactive dust from the disused mines. At the base of the mountains is a spring which the villagers rely on for their water supply. "We knew nothing about radiation until very recently," said Francis Clah, father of ten children. "I'm worried enough about myself, but even more so about my children and any future grandchildren I might have."

As a result of Charley's investigations, decontamination of the disused mines has finally started. There are so many holes, however, that nobody knows how long the operation will take to complete. "If this had been a white town, you can be sure that they would have got on to it a lot more quickly." Charley's face hardened. "Some things never change: they trampled all over us before, and now they're doing it again."