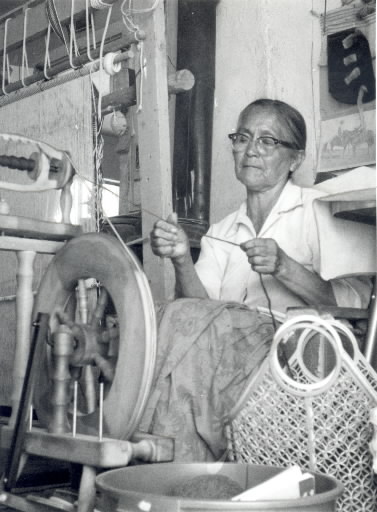 Traveling around the Navajo reservations that stretch from New Mexico into Arizona, we were struck by the unusual style of housing there. Some houses were shaped like inverted bowls, while others were built in hexagonal form. These were the traditional Navajo houses, known as hogan, which recently caused great consternation in the community when they were found to be contaminated by radiation. Fornic Yazzie, aged sixty-eight, is one of those who lives in a "radioactive house" in Red Valley. In July 1989 her home was checked by an employee of the local Navajo council, who detected radiation in two places: the chimney of the main building and the foundations of the outbuildings. Fornic's husband, Clifford, passed away eighteen years ago and since then she has lived alone.

When we visited she was spinning wool to make into traditional Navajo carpets. She keeps about a hundred head of sheep for the purpose, spinning the wool and then weaving it on a mechanical loom. One small rug takes her two months. Every day she sits with her back to the fire, spinning and weaving. "They told me that radiation was detected in this chimney," she confided. "But there hardly seems any point in pulling it down and putting up a new one at this late stage, does there?" From the front of the house we could see holes scattered over the face of the steep, red mountains nearby. These were the remains of the uranium mines in which Fornic's husband had worked for twenty years. The rubble discarded after the uranium had been sorted was left to pile up around the entrances to the mines. Most of these rocks were a foot square and about three inches thick; the perfect material for building foundations, walls, and chimneys.

From the 1950s on into the early 1960s, Clifford brought the rubble home after work and used it to slowly build up the main building and the storehouse. The chimney was constructed at the same time. Clifford Yazzie later died of lung cancer.

A quarter of a mile up the road to the north of Fornic Yazzie's house was other Hogan made of mud and stone. Every house we asked at had, without any qualms at all, used the rubble from the mines as a building material. As the residents put it, "everyone did it, and no one told us it was dangerous." We wondered if it was really safe to be exposed constantly to radiation day in, day out.

"There's no way that could be safe," commented Linda Taylor of the Southwest Research and Information Center in Albuquerque, which is involved with assisting victims of radiation among the Navajo.

According to Taylor, the reason nothing has been done for the uranium workers is because not enough is known about the effects of low doses of radiation and that it was too easy for the government to sit back and take advantage of the locals' lack of education.

The radioactive houses are now being pulled down one by one. Yet in Mrs. Yazzie's case, even if the contaminated material were removed from her home, she would still be unable to escape the dust from the abandoned mines that are stirred up every time the wind blows. A note of irritability crept into her voice at the suggestion of moving.

"This is our land. We can't just run away from it like that."