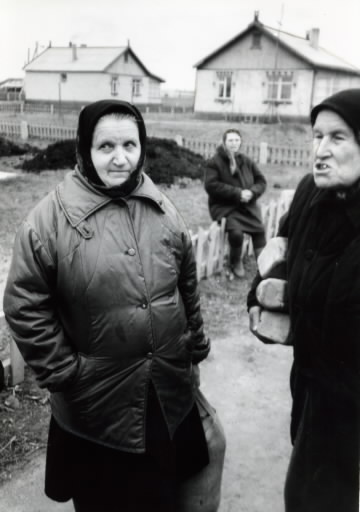 Among the Soviet people, it is said with more than a touch of irony that there are two "truths" about the events at Chernobyl. One is the "scientific data" released by the government. The other consists of the rumors that circulate among the people by word of mouth. The scientific data is a form of deception which seems credible enough to be true, while the rumors are stories which seem too incredible to be true.

The rumors seem to have quietened down compared with the period just after the accident. However, whenever the authorities release more scientific data, they begin to circulate anew. It is hardly surprising that this should be the case. The Soviet people had been led to believe by their government that there was "nothing safer than nuclear power," but any faith they had in these assurances was destroyed the moment that Chernobyl's reactor No. 4 exploded in 1986. Not only those directly exposed to the radiation, but the Soviet people in general have been infected with a mistrust of nuclear power ever since. Since the accident, each official announcement has brought with it a new wave of speculation about the facts.

To describe this state of mind whereby a person becomes paranoid about radiation and its effects, the Soviet media often uses the word radiophobia. It expresses the feelings of the Soviet public, who are torn between the truth as told to them by the government, and the rumors they hear through unofficial channels.

We experienced this radiophobia at first hand while visiting Logena collective farm in the Gomel region of Belorussiya. There we spoke to Aleksandr Obrichenko, a truck driver who had moved to the farm from his home village of Dabradi, about ten miles from Chernobyl. On hearing where we were from, he bombarded us with questions about Hiroshima. The focus of Obrichenko's worry was his children, aged nine and four.

For twelve days after the accident no information was given out regarding contamination. On May 8, the family was evacuated to the village of Galloutiti. When it became known that this village was also contaminated, they moved to Logena Farm five months later.

Since that time he has had medical checkups twice a year, which include blood tests and a throat examination. The doctors consistently give him a clean bill of health, but he is still worried about his throat because he once heard that a swollen throat can turn cancerous. He asked us if this was true. A doctor who had joined our discussions with the group of evacuees began to explain to them about iodine-131 and its effects on the thyroid gland, but he was soon shouted down by the others who insisted that they were more interested in hearing about Hiroshima.

It is hardly surprising that the residents of Logena Farm had little time for the doctor's words. Figures released for the first time by the Soviet meteorological service just before the third anniversary of Chernobyl show that a far wider area of land than previously acknowledged had been subject to high levels of radioactive contamination. The affected area extended well over the eighteen-mile-radius evacuation zone. This put the farm, which for most of the residents was their second refuge, within the danger zone. One of the evacuees, Maria Petrenko, expressed the feelings of the group in her outburst of frustration condemning the authorities.

"What are we supposed to do? I have a weak heart, my husband coughs constantly. If this place is contaminated too, we might as well have stayed where we were to get cancer!"

The director of health for Gomel, Anton Aromanovsky, who had been showing us around, stayed silent. He had no answer for her.

Around the time that this new information was released the Soviet government announced a further series of evacuations covering a total of twenty-five villages in the Ukraine and in Belorussiya. Aromanovsky was given the thankless task of evacuating eight of these villages--with a total population of two thousand. He not only had the evacuation to contend with, but also the ominous spread of radiophobia beyond these eight villages to the rest of the area under his jurisdiction. It is difficult to see how this new disease born out of the Chernobyl disaster can ever be cured when nothing is done to allay fears and prevent the virus of suspicion from flourishing among the Soviet public.