7. Learning from Hiroshima and Nagasaki 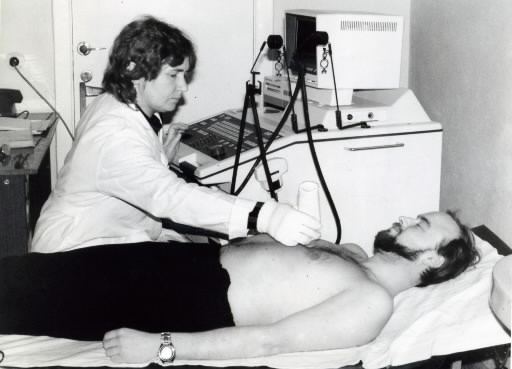 While gathering material about Chernobyl and the surrounding areas affected by radioactive contamination, we were continually frustrated at the difficulty involved in obtaining a total picture of the damage. Our investigations showed that the scale of the damage was increasing year by year, and there was no indication that the situation would stabilize in the near future. We could not help thinking that part of the reason why it was such a daunting task to grasp the overall picture was that the Soviet government itself had little idea of the true extent of the damage done to the environment after the accident at Chernobyl.

Soviet doctors concerned with the effects of radiation from Chernobyl are using studies and surveys undertaken in Hiroshima and Nagasaki as reference materials in their own investigations. This was borne out in our meeting with Angelina Guskova, director of hematology at Moscow's Hospital No. 6 and the leading authority in the field of radiation sickness in the Soviet Union. Directly after the accident she had worked twenty-four hours a day overseeing the treatment of casualties. During our interview, she expressed a desire to study in Hiroshima and asked us if it would be possible. It was clear that she felt a visit to the place with the most experience in treating victims of radiation was extremely important for her research.

With the aim of providing a center for observing the condition of victims of radiation over a long period, the All-Union Scientific Center of Radiation Medicine was established in Kiev in October 1986, six months after the accident. The structure of the organization and its methods of data collection are modeled on those of the joint Japanese-American Radiation Effects Research Foundation (RERF), which has been conducting surveys in Hiroshima and Nagasaki for over forty years. The data obtained from follow-up surveys of victims of radiation in Hiroshima and Nagasaki constitutes the world's only real reference book dealing with the effects of radiation.

For example, a survey carried out by RERF covering a sample of 100,000 people who had been exposed to radiation, which took note of life span, cause of death, progression of illness, and genetic effects, was used as a model by the Kiev center. Like the RERF survey, the center's observations covered three main fields of medicine: clinical, epidemiological, and radiobiological.

The survey covered 600,000 people including 209 patients suffering from acute radiation sickness, 116,000 evacuees from an area within an eighteen-mile radius of the plant, 230,000 residents from the contaminated area outside the eighteen-mile-zone, and 160,000 people who had worked at Chernobyl and/or were involved in the cleanup operation, as well as the children of those exposed to radiation. In addition, children born within the designated areas after the accident—as of 1989 there were 3,200 births—were also investigated. The Chernobyl research differs from that conducted in Hiroshima and Nagasaki in the scale of the survey: 600,000 people were observed as opposed to 100,000 in Japan. Also, victims of the Chernobyl accident were not affected by heat or a bomb blast as occurred in Japan.

Most of the data concerning radiation-related illnesses, as well as international standards for safe levels of radiation, are based on studies done in Japan. There is no doubt that the information drawn from research in Hiroshima and Nagasaki, ranging from overall figures to detailed technical know-how, is of major interest to the Soviet Union, which is learning to deal with the consequences of the worst nuclear accident in history.

In March 1989, the deputy director of the Kiev center, Oleg Pyatak, visited Hiroshima. Close ties were further established when the chairman of RERF, Shigematsu Itsuzo, and the director of the Hiroshima University Research Institute for Nuclear Medicine and Biology, Kuramoto Atsushi, visited the Soviet Union at the invitation of the Soviet government.

Results obtained in Hiroshima and Nagasaki show that leukemia begins to appear three years after exposure to radiation, and thyroid dysfunction and lung cancer from between five and thirty years afterward.

While visiting the research institute at Hiroshima University, Pyatak, commenting on the surveys that have been carried out over the previous two and a half years, remarked, "At this stage we have had no cases of leukemia or cancer, and there appears to have been no ill effects on children aged fifteen and under. However, we expect that problems will start to appear in the near future."

Although it remains to be seen whether the Soviet data will produce the same results as those of Hiroshima, it is clear that the real problems are only just beginning for those who received high doses during and after the accident at Chernobyl. The Soviet medical community continues to use research done in Japan as reference, while the attention of the world's doctors is in turn focused on Chernobyl.