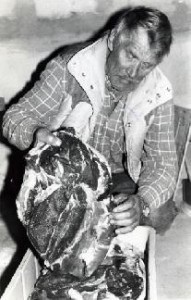 Curious to find out more about the effects of radioactive contamination in the area, we left the Blinds' and traveled to the next village, Saxnas. "Have a taste of this," said Gustav Fjællstrom, offering us some smoked reindeer meat. Fjællstrom, a geography teacher at the local high school, had learned the technique of smoking reindeer meat from his father, and he was obviously proud of his skill at preparing this traditional Lapp food.

The meat had a delicate flavor, which became more apparent the more we chewed. Fjællstrom noted our appreciation and nodded. "However," he said, his expression becoming more serious, "there's something I should tell you about this meat."

"When I had it checked at the laboratory, they told me that it contained a cesium level of 5,000 becquerels. I was cautioned not to eat more than one hundred grams (4 oz.) per month. I still find this hard to believe, so I was wondering if you could take some back to Hiroshima and test it for me?" The Lapps' main source of protein is reindeer meat, and adults eat up to five hundred grams (18 oz.) per day. This adds up to 180 kilograms per year, or four head of reindeer. Setting a limit of one hundred grams per month is virtually the same as telling the Lapps not to eat their meat at all.

Since the Chernobyl disaster, Lapps living in the worst-affected areas have had no choice but to buy meat from the relatively unaffected northern part of Lapland. There are still those who take the risk of eating their own reindeer meat, however. Nearly as important as reindeer meat in the Lapp diet is freshwater fish, such as trout and char, but the lakes from which these fish are caught have also become contaminated with cesium.

The only way to avoid accumulating cesium in the body is to avoid all contaminated foodstuffs. But for the largely self-sufficient Lapps, this is not a realistic alternative. It is ironic that these people, who live in a land devoid of exhaust fumes and agricultural chemicals and who have enjoyed for generations the bounty of nature in the form of fish and reindeer, now show the highest levels of radiation in the whole of Sweden. At Umea University on the edge of Lapland, a group of thirty Lapps (eleven females and nineteen males) has been tested for cesium contamination every six months since the accident at Chernobyl. Professor Göran Wickman, who has been engaged in this work, discussed some of the results with us while showing us around the campus.

These levels are 360 to 860 times higher than the average level recorded in Japan. "The figures may seem high, but we are not worried about health problems, as they are still below the internationally accepted level of exposure, which is 0.1 rem," he continued.

Not all the experts are so optimistic, though. Professor Lars Engstedt of the Karolinska Research Institute, which is known for its work on cancer, is one who disagrees. "It cannot be said with absolute certainty that there are no effects at that level. There are still too many things we don't know about radiation and its internal effects."

We took the reindeer meat that Gustav Fjællstrom had given us back to Hiroshima and had it tested at the Department of Applied Nuclear physics at Hiroshima University. As expected, the reading was 5,000 becquerels, thirteen times the legal limit of 370 becquerels imposed on imports into Japan. The result was no surprise to Fjællstrom, but he still sounded subdued when we passed on the results to him over the phone.