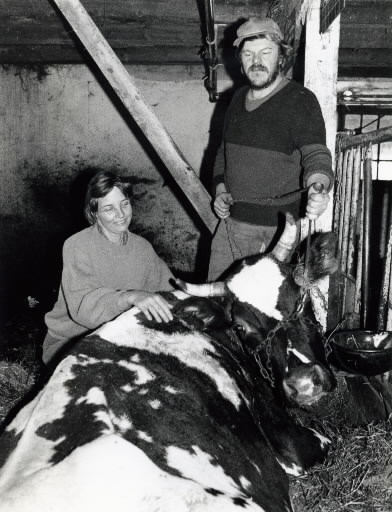 The radioactive contamination of Sweden was not confined to Lapland. Rain containing a cesium concentration of 100,000 becquerels per square meter fell on the city of Gävle and the surrounding area, one hundred miles north of Stockholm. This level is actually higher than that recorded in Lapland, and in one area stretching sixty miles south from Gävle to the city of Uppsala, levels of between 30,000 and 60,000 becquerels were recorded. Directly after the accident at Chernobyl, the Arbetarbladet, the Gävle newspaper, reported almost every day on the damaging effects of the cesium with headlines like "100,000 liters of nuclear milk dumped daily" and " 15,000 becquerels—the contamination of grass continues." Lars Erik Hillbom, who keeps eighty head of beef cattle on the outskirts of Gävle, recalled events immediately after the accident was announced.

"We were told to throw away all of our hay and manure, and not to sell any stock. It was terrible."

One elderly couple on a dairy farm just outside Uppsala was unfortunate enough to be living on the worst-affected piece of land in the area. Even in August 1986, four months after the accident, the milk their cows were producing still had a cesium level of over 300 becquerels per liter. With no improvement in sight in the near future, the couple sold out and gave up farming. The farm was bought by Sören Farmgren and his wife Ingela. They began to operate it again as a dairy farm in January 1987. It was an opportunity for them to farm independently, rather than as tenants as they had been until then.

"Naturally we were worried about the contamination. But we figured that eventually the problem would work itself out, so we decided to buy the place," Sören said in his unhurried manner. "The first year was really tough," he added.

Their first task was to obtain feed from low contamination areas, but even by doing this, they were unable to get the cesium level lower than 100 becquerels per liter.

In Sweden, annual per capita milk consumption is two hundred liters (approx. fifty-three gallons). Fearful of an increase in the amount of cesium absorbed into the body from drinking contaminated milk, the government directed farmers to get the cesium level of their milk down to 30 becquerels, a tenth of the highest level at which milk can legally be put on the market. The milk processors have managed to bring this down further, and consumers are now drinking milk which has a level of around 10 becquerels. This policy stands in stark contrast to that applied to the minority Lapps, for whom the regulations concerning levels of cesium in meat were relaxed considerably to ease the financial burden on the government.

Meanwhile, the Farmgrens were still left with the problem of how to reduce the 100-bequerel level. Sören plowed all his land, digging down to a depth of between twelve and twenty inches, burying the topsoil and exposing the uncontaminated soil underneath. He then added potassium to decrease the amount of cesium absorbed by the grass.

As a result of his efforts, the couple has succeeded in bringing the cesium concentration in their milk down to the acceptable level.

"I've been looking after the cows these two years, poor Sören has had his work cut out for him with the soil," Ingela remarked jovially. However, when we interviewed them their task was still not complete, as over half of the eighty-five-hectare farm had still to be turned over and treated with potassium. In 1989, the Farmgrens had thirty-eight dairy cows, including thirteen calves. Daily milk production was around four hundred liters, and they have plans to increase the number of stock. In order to do this, they must first bring the remainder of their land into production. It is a time-consuming and frustrating task, but one that is necessary to reduce the levels of cesium contamination.