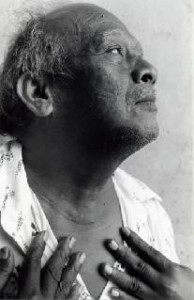 Chapter 3: The Central, South Pacific and Australia
Part 1: The Nuclear Refugees of the Marshall Islands

The devastation caused by radioactive fallout was not confined to Rongelap. We witnessed proof of this when we visited Majuro, an island in the Marshall group southeast of Bikini.

Risen Mikel had just returned from the United States when we interviewed him. He had been there for his second operation to have a tumor removed from his thyroid gland. The base of his throat was marked by a painful-looking crescent-shaped scar.

Utrōk Island, where he was born and raised, lies 325 miles to the east of the Bikini test site. He was eighteen years old at the time of the Bravo test. "I heard that Rongelap was covered in one or two inches of ashes after the test. On my island it was more like mist than snow," he said.

According to the findings of the Atomic Energy Commission (AEC), forerunner to the Department of Energy, the average radiation dosage of the Utrōk islanders was 14 rads. This figure was not even a tenth of that of the Rongelap islanders, so the AEC came to the conclusion that the environment and the health of the islanders would not be affected by the explosion. On the basis of this data, 157 former residents of Utrōk, including Mikel, were permitted to return home barely three months after the test. Despite reassurances from the U.S. government that the island was safe, the effects of the ashes began slowly but surely to make themselves felt. Whereas the Rongelap islanders had begun to feel the effects of the testing during the 1960s, it was not until ten years later that the residents of Utrōk began to comprehend fully the consequences of that day in 1954 when their island had been bathed in a mist of ashes.

The medical survey teams which visit Utrōk once every two years had always assured the islanders that there was nothing for them to worry about. Hearing this the people were relieved that they had escaped any ill effects of the test. This state of affairs continued until around 1970, when a lump appeared in Mikel's throat. After several examinations, the doctors acknowledged that the lump was in fact caused by exposure to radiation. In 1980 he went to the United States for his first operation.

Another of the Utrōk islanders now living in Majuro, Carl Joel, aged seventy-three, counted the number of his fellow islanders who had been operated on for thyroid conditions.

"There are at least forty people," he said, "including, strangely enough, some who weren't even living on the island at the time of the tests." One of these is Mote Brian, who arrived in Utrōk to take up his duties as a minister in August 1954, five months after the test. He spent nine years there before returning to Majuro. Brian also began to have problems with his throat in the early 1970s, resulting in the eventual removal of a tumor in 1980. Despite the relatively low radiation dosage of 14 rads, the people of Utrōk have not escaped the effects of the 1954 test, nor have some of those whose exposure was only secondary. The case of the Utrōk islanders seems to defy the conventional wisdom of the world of radiation medicine.

One of the most popular foods among the people of the Marshall Islands is the coconut crab. This large crustacean, which is so named because coconuts are its main source of food, has a curious habit; it eats the shell which it sheds every year. Unfortunately, its diet of coconuts and the habit of eating its own shell have caused an unusually large amount of radioactive substances to accumulate in its body.

The AEC was aware of the danger of eating this highly contaminated crab, so its consumption was banned on Rongelap. However, no such warning was given to the people of Utrōk. As Brian remarked wistfully, "We used to catch and eat those crabs all the time. If only they had told us, we would never have touched the meat."

Mikel, Brian, and the others who have had throat operations all carry bottles of small pink pills. These are thyroid hormones prescribed by the doctor each time they go for a checkup, with the warning: "Every day you forget a pill takes a year off your life." Coping with the aftereffects of those 14 rads has become a lifelong struggle for the Utrōk islanders.