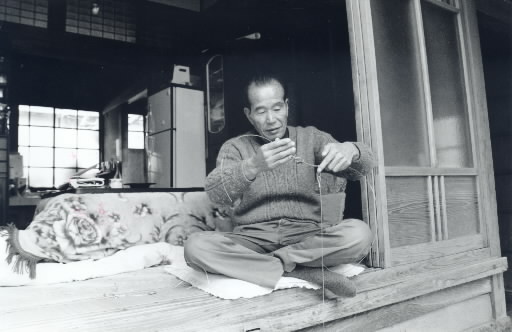 The crew of the Daigo Fukuryu Maru were not the only fishermen to feel the effects of the hydrogen bomb test at Bikini—there were hundreds of other boats working in the Marshall Islands area at the time. A team led by Professor Yoshitomi Keiichiro of Kochi University has succeeded in uncovering evidence of radiation-linked illnesses among the crews of other boats. Of the 241 fishermen so far surveyed, sixty-one have already died, mainly of leukemia, cancer, or cirrhosis of the liver. We visited one of the surviving fishermen at his home in Muroto, Kochi Prefecture.

At the time of the Bikini test, Yamashita was a wireless operator on the Daini Kosei Maru, which was owned by his father. They left the port of Uraga in Kanagawa Prefecture a month after the Fukuryu Maru, on February 24, and headed for a stretch of water 560 miles east of the Marshall Islands. After completing operations they returned to Tsukiji in Tokyo on April 15. The period during which they were in the vicinity of the Marshall Islands coincided with tests carried out at Bikini on March 1, March 27, and April 7.

"I can't remember being exposed to any radiation myself," Yamashita told us. "But when we returned to Tsukiji we were advised to have a check with a geiger counter. It was quite a shock when a reading of 250 was given for my hair." The other twenty-four crew members had similar experiences, and the boat and all of its equipment were found to be contaminated as well. "I don't think any ashes fell," he continued. "The radioactive material must have been mixed in with rain." When it rained it was usual for the men to go up on deck and rinse the salt off their bodies. This must have been when they were exposed. "At the time, we were more worried about not being able to sell the tuna..."

Yamashita, who had owned a boat himself at the height of his career, gave up tuna fishing in 1974 when the industry was in a state of depression. He turned his hand to processing, and retired from the fishing industry altogether at the end of 1989. Apart from an operation for a stomach ulcer, he has had no major health problems. He was amazed to hear that of the twenty-five men who had sailed on the Kosei Maru on that voyage in 1954, twelve had died of cancer or cirrhosis of the liver.

"The most incredible thing is that most of them were younger than me," he said sadly. "I don't like to think their deaths were caused by the radiation, not after all this time. But to have this many pass away..."