7. Appealing to the World on Behalf of the Islands 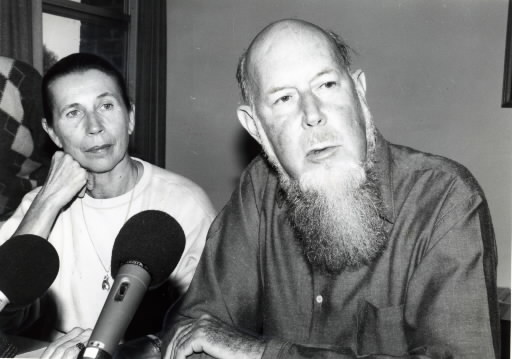 Chapter 3: The Central, South Pacific and Australia
Part 3: The French Cover-up in Polynesia

Several times during our investigations in French Polynesia mention was made of a couple who have been working for years to bring the crimes of French nuclear testing to the attention of the world. Hearing that they were in Australia on a lecture tour, we stopped off in Sydney on our way back to Japan.

We met anthropologists Bengt and Marie Therese Danielsson at the University of New South Wales in Sydney, where they were due to speak to a group of about ten students and local citizens about the remaining colonial outposts in the Pacific.

The lecture lasted approximately two hours and covered a number of topics, including the history of French Polynesia and the environmental damage wrought by the tests. At the end of the session one student raised her hand. She introduced herself as a French exchange student, and went on to admit tearfully that, to her shame, she had had no idea of the tragic situation her country was causing in the South Pacific.

Danielsson later remarked, "It's not just that student who doesn't know; the French government has not told anybody anything about this. That's why we believe our task is to inform people about the situation. If only one person goes away today with some knowledge about what's going on in French Polynesia, we feel that we've done some good." The pair have traveled all over the world appealing to the public in the hope that their actions will help to force the French to give up underground testing.

Danielsson is Swedish. In 1947 he took part in the famous Kon-tiki expedition, and traveled over five thousand miles across the Pacific by raft from Peru in an effort to unravel the mystery of the origins of the Polynesians. Since 1949 he has lived with his French wife, Marie Therese, in Papeete. While continuing his anthropological fieldwork, he observed the tests and became a thorn in the side of the French authorities.

The couple's belief that nuclear testing is destroying the land they love and the health and way of life of its people, has become the basis for all their actions. The period from 1972 to 1974, when public opinion forced the French to take their testing underground, is particularly memorable for the Danielssons. With their help, the nations of Oceania brought an action against France in the International Court of Justice, protest ships sailed to Moruroa, and there were boycotts of French goods as far away as South America and Southeast Asia. "If that enthusiasm could be generated again, we could stop the underground testing as well," said Marie Therese. Her husband agreed. "It would be marvelous to have that level of support again," he remarked wistfully, stroking his beard.

The Danielssons' dream may well be realized in the not-too-distant future. Since Jacques Cousteau reported that there were fissures in the coral at Moruroa and Fangataufa, the French Department of Atomic Energy has begun to search for a new test site, and time is running out. One candidate for the new test site is the Marquesas Islands, situated approximately 930 miles to the north of Moruroa and about 930 miles northeast of Tahiti, with a population of seven thousand.

The couple are determined to ensure that the Marquesas do not become the third island to be destroyed by French nuclear testing, and consequently they have been traveling widely through Oceania, Western Europe, and South America, speaking to people in a renewed effort to heighten public awareness. With the people's support, they are hoping to force France to give up underground testing before it decides upon the new site, with the aim of halting the further increase in radiation-linked diseases in the South Pacific.