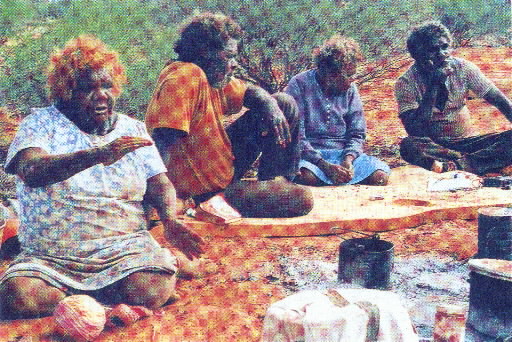 On October 3, 1952, an atomic bomb was exploded at Monte Bello Island in the northwest of Australia, heralding the arrival of Britain as the third nuclear power after the United States and the Soviet Union. Unbeknown to many people, tests continued to be carried out in the Australian desert and on Pacific islands by the British until 1958. During those six years, a number of Australian Aborigines as well as Australian and New Zealand servicemen were exposed to radiation, but it was many years later before the tests were finally acknowledged by the British government.

The residents of Oak Valley were evicted in the fifties when the British decided to conduct nuclear tests at Maralinga, sixty miles southeast of their village. Forced to move 120 miles south to Yalata, the people of Oak Valley and other local Aborigines were only permitted to return to their land thirty years later, in late 1984. The villagers, numbering thirty in all, decided to return to their homeland.

When we touched down on the runway, only distinguishable as such by its lone windsock, one of the local men drove up to check us out. When we told him that we wanted to talk about Maralinga, he took us into the village. There we met several people who had witnessed a bomb test.

One of the men, by the name of Pepa, began to tell their story: "While we were moving south, a huge mushroom-shaped cloud rose up into the sky and drifted over our heads."

"The earth shook, frightening the dogs that were walking with us," another said. "Our dog started to howl when he heard the noise—it was like thunder."

"It was the strangest cloud we'd ever seen," Pepa added.

We asked them when and where they had seen the cloud, opening up a map. The map, however, was of little use—the only thing they knew was that it had happened while they were moving south. As to why they were moving south, they had no idea except that one of the whites had come and ordered them to go, with no explanation whatsoever. Reluctantly they had packed up and started to walk.

After witnessing the explosion they traveled south for several days, hunting as they went. Unable to catch any kangaroo, their favorite delicacy, or even wild rabbits or lizards, they had to be content with insects from the roots of trees.

On their arrival in Yalata, they found a number of groups that had been ordered south in the same way as themselves. They were too afraid to mention the mushroom cloud, they said. A compound was built, and the displaced Aborigines began a new life, still with no explanation of why they were there or when they could go home.

Was anyone sick? Did you have any examinations? For a people with no knowledge of radiation or medical care, these were meaningless questions. All they did was shrugging their shoulders.