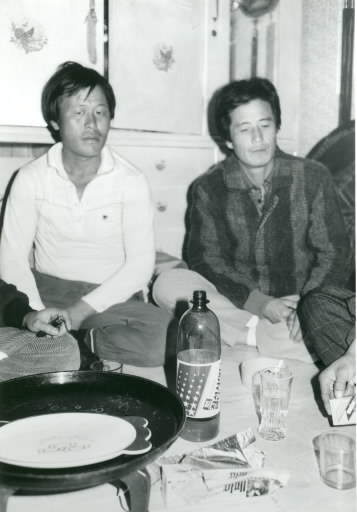 Approximately twenty miles northeast of Pusan, near the village of Kori on the Sea of Japan, is the site of South Korea's first nuclear power plant, which went into operation in 1978 during the Park presidency. Three more reactors were added soon after to make it the country's largest nuclear power facility.

"The money was good, and that was the main thing," remarked Choi Dae-Young, aged twenty-eight, the mayor of Hyoam, the village next to Kori. With these words he summed up the local residents' eagerness to work as day laborers at the plant when it first opened. The region had been largely left out of Korea's economic miracle, and the people scratched out a living by cultivating seaweed.

We spoke to Song Moon-Gil and Kim Hak-Moon, two men who had worked at the Kori plant. They told us that, although they had been aware of radiation, they "hadn't thought there was much to worry about."

To the men, the daily rate of 20,000 won had seemed ample incentive to work at the plant. Song and Kim worked for the second time at Kori in 1989 for a month during a lull in the seaweed industry, conducting inspections of the pipes in the steam generators. The pair described their work and the state of their health with a surprising lack of concern:

"We used to take the asbestos lagging off the pipes and wash them in disinfectant, then scrape off the rust. Some days we had radiation levels of 90 millirems." Often it was too hot for them to wear masks. After a few days of this work, spots began to appear on their stomachs and backs, which the two men and their fellow workers diagnosed as heat rash. Neither Song nor Kim usually drank, but working at Kori left them so tired that they began to do so to alleviate their fatigue.

Hong Joo-Bo, plant manager at Kori Nos. 3 and 4, informed us that even the day laborers receive thorough training and safety instruction and insisted that "there must be some other reason for their tiredness and skin conditions."

Despite Hong's assurances, the working conditions at the plant as casually described to us by Kim and Song were somewhat different. "I used to write the radiation levels in at less than they actually were, sometimes at zero," said Song. "When I thought my level was getting too high I used to leave my detector in the changing room--nobody ever found out," added Kim.

The Korean Ministry of Science does not allow workers who register more than 1,250 millirems in three months to engage in operations within the restricted radioactive zones of power plants. According to the ministry, checks are carried out every three months and suitable measures taken to ensure that employees' readings do not go over the internationally accepted annual limit of 5,000 millirems. The ministry adds that, in 1988, of the 6,639 people employed at nuclear power facilities in South Korea, not one showed a radiation level over this amount.

According to Kim and Song, they altered their records after a month of work, putting their total radiation levels at around 800 millirems. The reason was quite simple: going "over the limit" meant no more work, and making a living was of more importance to them than possible danger from exposure to radiation.

During the period from 1988 until the start of 1989, five deaths from cancer were reported in the village of Hyoam, which has a population of 750. Of these five, the three males were all day laborers at the Kori plant. Adding to the local residents' suspicions was the discovery of gloves and other rubbish from the plant buried secretly in the village. Amid the controversy created by these incidents came the contamination scare at Yeonggwang at the end of July, and then the health problems being experienced by Song, Kim, and several other workers at the Kori plant began to take on a new light.

After the public outcry in the summer of 1989, the corporation paid a "radiation exposure allowance" of between 60,000 and 100,000 won (approx. U.S. $90-160) to nine workers including Kim Hak-Moon and Song Moon-Gil. The mayor reproved them for "endangering their lives for such a trifling amount of money," and the pair agreed that they would never work in a nuclear facility again.