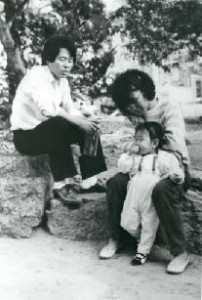 On June 9, 1989, Pang Yoon-Dong, a young worker at one of Korea's nuclear power plants, died of stomach cancer.

"I want to know what really caused his death, even if I have to go to court. But it's like trying to attack a fortress with a slingshot—it's hopeless," said Pang's younger brother, Yoon-Doo. His parents sat next to him, silently watching Yoon-Dong's twelve-month-old son playing happily with a fly-swat. We visited Pang's family at their home in the rice-growing district of Ansong-gun, Kyonggi-do, thirty-five miles south of Seoul. The early winter sun bathed the paddy fields and a row of stately poplar trees in light. The farm in Ejook-Myon village, where Pang Yoon-Dong was born, is a typical medium-sized farm, with four acres of rice and one and a half acres of vegetables. He was the fourth of eight children. After graduating from the local high school and completing three years of military training, at the introduction of a friend from the same village he joined a company which did work on a subcontract basis for the Korea Electric Power Corporation, and started work at the Kori plant in January 1984.

"He was a hardworking boy," said his mother. A strongly built, taciturn man who neither drank nor smoked. On his rare visits home he spoke of his wish to become a full-time employee of the corporation and be transferred closer to home, but apart from that Pang hardly ever spoke about his work. His starting wage was low at 140,000 won per month (approx. U.S. $230), so his parents sent rice and vegetables to help out the newly wed Pang and his wife, Choi Chang-Ran.

After several attempts Pang succeeded in becoming a qualified electrician, and he joined the full-time staff of the corporation in April 1988. When Yoon-Doo made a congratulatory visit, however, he was shocked to find his brother a haggard shadow of his former self.

"Here was I thinking he was having it easy working at this big-time power plant, when in fact he wasn't able to take any holidays, and he'd lost his appetite completely."

In June the same year, Pang succeeded in obtaining a transfer to the Pyongtek thermal power station near his home town. By this time he could hardly force food down his throat, and six months later his dreams were shattered by the discovery that he had stomach cancer. He was operated on at Seoul University Hospital, but it was too late: the cancer had already made its way into his liver.

"Former Power Corporation Employee with Incurable Cancer" was the headline that the newspaper Hangeorae used on its first scoop of 1989. The connection with radiation exposure drew the interest of the public, and the media became the battleground for a war of words between the power corporation and the antinuclear movement.

Pang's duties at the Kori plant had included the regular inspections of reactors No.1 and 2, and the repair of the electrical wiring and pumps on the occasions when part of the system ceased operating without warning. The power corporation insists that the most radiation Pang was ever exposed to was in 1985 when his annual total was recorded as 2,647 millirems. Pang worked at Kori for a total of four years and three months; his average total exposure to radiation was said to be 1,109 millirems, well below any level likely to cause cancer.

On the day of the funeral, a gift of one million won from the power corporation was delivered to Pang's widow, with an offer of work. Pang's brother does not believe the power corporation told the whole truth about the amount of radiation his brother was exposed to. He has asked several times to see the pertinent records, but the management refuses to disclose any information. Pang never appeared to hold any grudge against the company while on his sickbed, but whenever the power corporation's side of the debate surfaced in the media he would say: "None of those people who are saying 'it's safe' ever went into any of the danger zones."