3. Destruction of a Natural Paradise 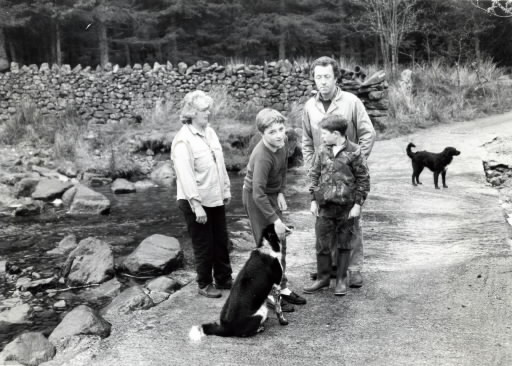 We went for a walk along the Ravenglass estuary. It was difficult to believe that, twenty years ago, the area had been a wildlife reserve, with up to twenty thousand sea birds nesting on the beach at any one time. Now only the odd seagull was to be seen, swooping down onto the vast stretch of sand.

When Christopher Merlin and his wife, Christine, moved into their new home overlooking the Ravenglass estuary, little did they know that in the course of time they would find it unsafe to live there. Unwittingly, they had bought a house which was highly radioactive. When we made inquiries at the village, we were informed that the Merlins had left and gone to live in the hills five years previously. Trying to find their home was no easy task; it took us two hours of traveling along a narrow hill road before we came upon an old stone house nestled in the hills, miles from other human habitation.

Two friendly dogs ran out to greet us at the door, followed by the Merlins and their two sons. A stream ran in front of the house, beyond which we could see a dense forest of pine trees. The house commanded fine views of the surrounding countryside.

The Merlins were originally from the suburbs of London. Christopher Merlin had often been taken to the beach at Ravenglass as a child, and in 1973 he and his wife decided to move to the area. The Merlins have many happy memories of those first few years after they moved; the kindness of the villagers, and the flocks of sea birds on the shore. At that time, they knew little about the Windscale nuclear complex, situated only a few miles to the north of what seemed like a natural paradise.

This happy state of affairs continued until 1976, the year before their eldest son was born. That spring, a man came to the house introducing himself as an employee of the National Radiological Protection Board and asked if he could set up a radiation monitor in their garden. The board, having told the Merlins that there was "nothing to be concerned about," was oddly reticent on the matter of possible contamination. A friend advised them to have the inside of their house checked for radioactive material, but the board was reluctant to cooperate. By this time the Merlins were more than a little concerned, so they sent a sample of dust from their vacuum cleaner to Pittsburgh University to be analyzed.

The results showed they had every reason to be worried. Plutonium and americium were detected in the dust, and radioactivity was recorded at a level of 13.5 picocuries per gram. The report from Pittsburgh added helpfully that, "in the United States, building permission is not given in areas where the level of contamination in the ground is one picocurie or more."

The couple eventually decided that, for the sake of their children, they had no choice but to leave. There was little prospect of selling their home on the estuary, and it took two long years before they could take out a loan and it wasn't until 1984 that they were finally able to move from the coast to the hills. During this period they appeared in a television documentary about the problem of radioactive contamination in Windscale. This earned them the hatred of the villagers, who complained that they wouldn't be able to sell their fish and that tourists would disappear.

In 1985, deciding they had had enough of the endless financial and emotional strain, the Merlins began procedures to demand compensation from British Nuclear Fuels, the public corporation which operates Sellafield. They are confident of winning, they say, because the company has no way of denying that it kept the truth about radioactive contamination hidden from the public.