1. The Irresponsible Handling of Radioactive Material 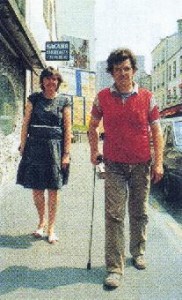 Along with the United States, Britain, and the Soviet Union, France may be considered a developed nation in the world of atomic energy. More than any other country, France relies heavily on this form of energy: seventy percent of its electricity is supplied by nuclear power. Yet despite this dependence, little is ever heard of accidents involving radioactive substances. Does this mean that there are none? With this question on our minds, we visited France in pursuit of the truth, and spoke to some of those living with the effects of exposure to radioactive materials.

1. The Irresponsible Handling of Radioactive Material

Gerard Noury, aged forty-three, who is physically disabled, and his wife, Annick, came to visit us at our hotel in a working-class area of Paris. Noury looked to be in a great deal of pain as he leaned on a walking stick for support, dragging his crippled leg.

The couple had traveled to Paris from their home in the port city of Le Havre, approximately 150 miles away on the Channel coast. After a short rest, Noury began to tell us about the accident he had been involved in and its effect on his life. In June 1970, he had been working at a factory under contract to the French Atomic Energy Commission when he accidentally came into contact with a liquid containing the radioactive material carbon- 14.

"It was about ten in the morning. One of the pipes burst and the pressurized liquid began to spray out. My boss told me to shut the valve closest to the break, so I did. At the time I was wearing protective gear, but large quantities of the liquid still managed to get in through gaps in my clothing and the corners of my mask." By the evening Noury's arms had swelled up, and he was overcome by nausea. The next morning he visited the factory doctor, who dismissed his fears, saying that radiation had nothing to do with his illness. Noury had his doubts about the doctor's assurances, but three days later he was back on the job.

Two months later he got married. The swelling on his arms had gone down and he appeared to have recovered completely. Then, toward the end of the same year, two of his ribs broke while he was asleep. Noury was in hospital for nine months after that, during which time he lost his job. There was no mention of compensation.

Four more ribs broke after that, and in the early 1980s he lost the use of his left leg, at one stage having an operation on his knee. The Nourys went to Paris in an effort to find out the cause of Gèrard's ailment, but to no avail—every doctor they saw told them the same thing: that it had nothing to do with radiation. No tests were ever conducted.

In 1988, the couple, still clinging obstinately to their belief that Gèrard's troubles had originated in that accident of 1970, were dealt a further blow. A rumor went around that the medical establishment was being reticent about Noury's illness because he had AIDS. "Even our children's friends didn't want to come round any more," Gerard told us, his voice strained with emotion.

Ostracized by his neighbors, Noury decided to fight back. He attached a placard to his clothing with the words "I am not an AIDS patient. I am a victim of radiation," written on it, and began a silent vigil in one of the city's shopping centers. His protest was in vain. "We have only got ourselves now," his wife murmured. Recently her husband has begun to feel pain in his right leg as well. "I want to prevent my body from deteriorating any further. We've decided to buy a geiger counter to try and establish once and for all the relationship between my illness and radiation," he said. This was their reason for traveling to Paris. We were at a loss for words.