3. The Danger of Low Doses of Radiation 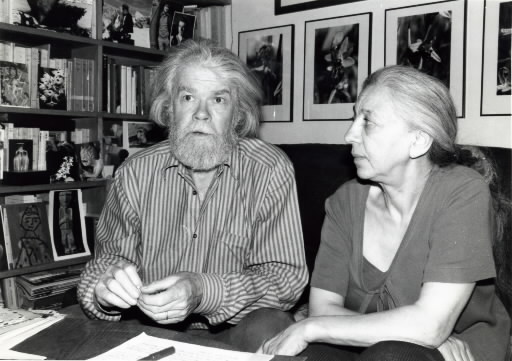 Bella Belbeoch, a nuclear physicist, has firsthand experience of the changes that even low doses of radiation can make to the human body. We visited Bella and her husband, Roger, also a nuclear physicist, and spoke with them at some length about the effects of exposure to low doses of radiation. Bella had worked for the Atomic Energy Commission analyzing the effects of radiation absorption on the structure of materials. She was involved in the experiments themselves, using X-rays, over a four-year period from 1956 to 1960.

"When I was working with the X-rays I always seemed to be tired," Bella told us. "And my periods were irregular as well." She turned to her husband for confirmation. "That's right," he laughed, "she used to think she was pregnant all the time..."

After Bella had been working in the same section for a while, her condition deteriorated from lethargy to anemia, and lumps appeared at the base of her fingers. The doctor told her that her white blood cell count was down. "I had a feeling then that it was because of the X-rays," she told us. After a short stay in hospital she returned to work, this time in the data analysis section, away from the experiments. Gradually her health returned to normal. Through her experiences, Bella realized that there are often marked differences in the way people working with radiation are affected. Many of the women doing exactly the same work as herself noticed no changes in their bodies whatsoever.

The Atomic Energy Commission was established under government auspices at the end of the Second World War for the purpose of developing not only nuclear weapons but also the commercial uses of nuclear power. According to figures supplied by the Confédération FranÇaise Démocratique Du Travail (CFDT), the labor union to which all commission workers belong, sixty cases of illness caused by exposure to radiation were officially recognized between 1946 and 1985. Bella Belbeoch was one of these.

"They told me I had the initial symptoms of leukemia. At that time even the researchers took the effects of radiation pretty lightly and it wasn't until one of the younger ones died of cancer in 1968 that people began to be more cautious." Her husband nodded in agreement and added, "If it was like that in a research institution among scientists, I hate to imagine what it was like at factories and power plants."

As a result of Bella's experience, the couple became interested in the effects of low radiation dosage. They were surprised to find that there was no research being done on the subject whatsoever in France. The unions and the media also showed a profound lack of interest, which in the Belbeochs' eyes was inexcusable. They had no choice but to visit specialists in Britain and the United States and to make their inquiries there.

Roger showed us some data published by the government in 1988, detailing the causes of death for French uranium miners. The figures showed that this group has a rate of lung cancer 2.7 times the national average. "The funny thing about this data is that it was presented at a conference overseas. You can't find it here in France," he said. "I got straight onto the media and the unions about it, but there wasn't even a flicker of interest. They didn't even bother to come and see the data. That's typical of the attitude here," he added disgustedly. His wife continued. "In this country, disease caused by radiation is treated just like any another illness. The people are told nothing. This problem really needs to be dealt with by the medical establishment—it shouldn't be physicists like ourselves giving out warnings, but until doctors get more interested we don't really have any choice," she concluded with an air of resignation.