2. Playing with the Deadly Powder 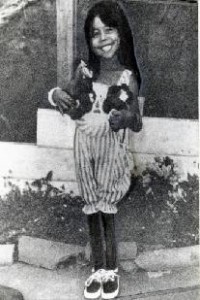 On the wall of a room in the Leide Foundation headquarters hangs the smiling photo of the little girl called Leide Ferreira for whom the foundation is named, and who, at six years old, became a victim of the blue powder.

Leide's father Ivo was the elder brother of the scrap dealer, Devair Ferreira, and one day he brought a small amount of the powder home from work and showed it to the family.

"The powder glowed in the dark when you turned out the light," Leide's mother said. "Leide put it on her face and hair and looked in the mirror. If only we'd known that it was dangerous..." Her voice trailed off. At eight o'clock that evening, the family of five sat down to dinner. Leide began to eat bread and boiled eggs with the same hands she had used to play with the cesium powder. After consuming only half her egg she collapsed and started to vomit. Continuing to vomit all through the night, she lay in bed crying, her small body racked with pain.

By the next morning, however, Leide had recovered enough to eat breakfast and go out to play. Her mother heaved a sigh of relief. That same day, the hands of Wagner Ferreira broke out in blisters and a rumor went round the neighborhood that the "bones were visible underneath." Those who had come into contact with the cesium-137 from the hospital site were beginning to show symptoms of acute radiation sickness.

Many visited their family doctors, but for a while the local doctors were mystified by their condition. Edson Fabiano, a car painter, was one of those whose fingertips swelled up after touching the powder—his doctor told him that he had probably been stung by a bee. It wasn't until two weeks after the cesium was first removed from the hospital site, and four days after Leide Ferreira became sick, that the true nature of the "glittering powder" came to light.

Fabiano observed the skin inflammation, nausea, and hair loss among his neighbors and was suddenly reminded of the pictures of victims of Chernobyl that he had seen on television. He traced their illnesses back to the powder and the scrap dealer, Devair Ferreira. The families who had been struck by the strange sickness took the powder to the state health authorities for appraisal, and as Fabiano had predicted, it turned out to be radioactive.

Even after the truth about the powder was made public, there were very few people who understood the nature of cesium, and this ignorance only served to exacerbate the suffering of those affected.