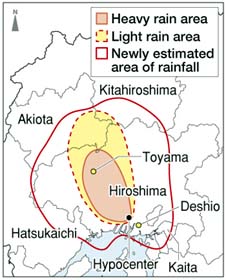 Radioactive materials fell with the rain

After the atomic bomb exploded, a huge mushroom cloud formed in the sky above the city of Hiroshima. Twenty to thirty minutes later, "black rain" began to fall. This dark-colored rain contained dust stirred up by the blast, soot from the roaring fires produced by the bomb’s heat rays, and radioactive materials emitted by the bomb.

In 1976, prompted by research conducted in the years since the bombing, the Japanese government designated the area of heavy black rainfall as the "heavy rain area." Those who were exposed to the black rain in this area are able to receive free health checkups. And in the event they develop certain diseases, such as cancer, they are eligible to obtain the Atomic Bomb Survivor's Certificate. The area of "light rain," however, is excluded from these support measures.