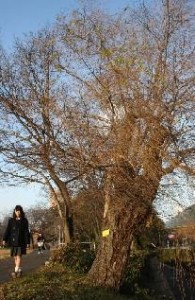 Preserving "living witnesses" of the bombing

A-bombed trees have endured the ravages of war and stand as "living witnesses" of the atomic bombing. According to the City of Hiroshima, about 170 trees within a 2-kilometer radius of the hypocenter survived the blast. These trees are located at 55 sites in this area and include 32 species, such as plane trees and Japanese hackberry.

The tree closest to the hypocenter is a weeping willow, which stands 370 meters away in Motomachi. Although the original tree was toppled by the bomb, a new shoot appeared at the base of tree.

In order to preserve the A-bombed trees and hand them down to the next generation, the Hiroshima city government has conducted research on the trees since 1996 and has registered the trees that stand on the grounds of public buildings, temples, and shrines. Those trees now bear plates which carry explanation about the atomic bombing.

The city also cares for the trees to prevent the roots from dying and to remove harmful insects. Despite this care, some trees have withered. At the same time, there are instances in which A-bombed trees located on private property have been transplanted to elementary schools and then added to the list of registered trees.

Seeds and seedlings from A-bombed trees are shared by the city and Hiroshima citizens with people in Japan and overseas, and these new trees are now growing in places all over the world. At elementary schools and junior high schools which maintain A-bombed trees, the trees are a useful addition to their peace education efforts.