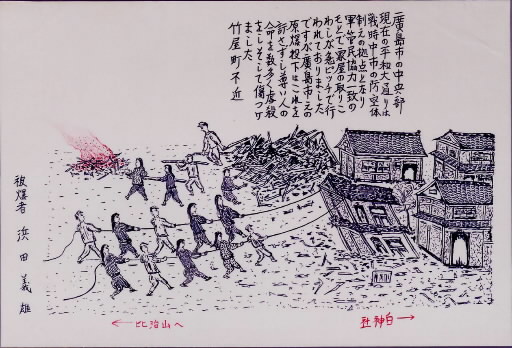 Preventing the spread of fire by creating fire lanes

"Building removal" involved tearing down buildings to prevent fire from spreading in the event of air raids. This practice was undertaken in cities all across Japan during the war. The city of Hiroshima began its own removal efforts in November 1944 by order of the central government. The city demolished structures that were around buildings officials wanted to protect from fire, including City Hall, the Prefectural Government Office, and military facilities.

By law, all citizens were required to help with the war effort. On August 6, 1945, the building removal work was being carried out by mobilized students (of today's junior high school age) as well as groups of adults who were organized according to area of residence or place of work. Many of the people involved in this work were killed by the atomic bomb. An exhibition held at Hiroshima Peace Memorial Museum in 2004 offered a death toll of approximately 5,900 mobilized students, perishing at the sites where they were helping to dismantle buildings.

Museum displays show possessions once owned by the victims, including a lunch box, charred black, and a female student's summer-type school uniform. Hironobu Ochiba, 34, a curator at the museum, said, "When visitors see these items, which are filled with the suffering of the dead and the sorrow of their families, I hope they will feel the horror of war and the importance of peace."