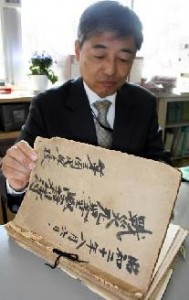 Midorimachi Junior High School adopted this name in 1949. The school was originally established in 1939 and known as the Hiroshima Municipal Third National School starting in 1941. The school offered a two-year course of studies for students who had completed six years of compulsory elementary-level education.

According to Midorimachi Junior High School, the school once had a large enrollment of 1,100 students, but after evacuations to the countryside took place during the war, the number declined to 310 students by 1945.

A record of the damage suffered by the school as a result of the atomic bombing indicates that the death toll included 143 students involved in dismantling buildings in the Zakoba area and nine students who were working at a power company in Tatemachi.

After a school register containing a list of victims was found in the school office, the school made an effort to learn what happened to the school community amid the atomic bombing. The student council took the lead in listening to the accounts of surviving students and teachers, and a booklet entitled “Blank School Register” was produced in 1980. The booklet is now used as a supplemental reader for peace education classes at the school.