Those who entered the hypocenter area after the bombing 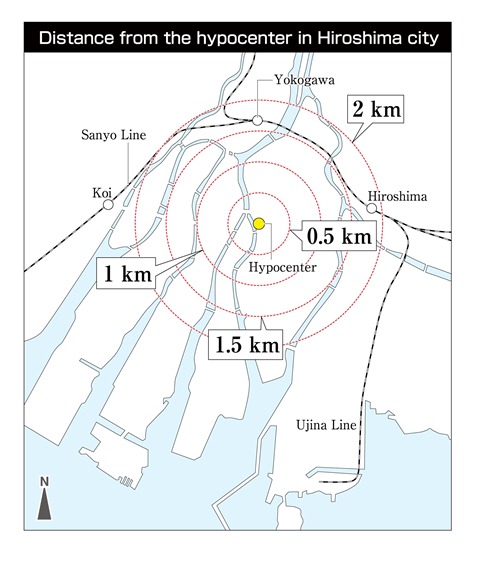 The Atomic Bomb Survivors Relief Law stipulates that those who entered an area within roughly 2 kilometers of the hypocenter within 15 days of the atomic bombings (in the case of Hiroshima, by August 20) can also be certified as atomic bomb survivors.

Other categories of certified A-bomb survivors are those who were in the city when the bomb was dropped and suffered a direct exposure, those who were engaged in providing medical aid and care to the victims, and the fetuses of such women.

People in these categories can be certified as atomic bomb survivors and obtain the A-bomb Survivor’s Certificate by submitting the necessary paperwork.

As of the end of March 2011, the Hiroshima city government has issued the A-bomb Survivor’s Certificate to 68,886 people. Among them, the number of people who experienced the atomic bombing directly stands at 41,990 people (61%) while 16,753 people (24.3%) entered the 2-kilometer area around the hypocenter in the aftermath of the blast. In Japan, the total number of A-bomb survivors of Hiroshima and Nagasaki is estimated at 219,410 people.