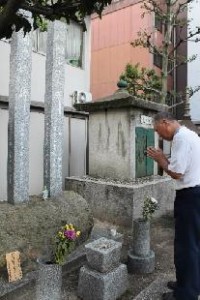 Many helping to create a firebreak died

When the atomic bomb was dropped, Hiroshima City Hall was located on the western side of the Zakoba district. City Hall played an important role in responding to air raids, such as issuing evacuation orders and implementing relief efforts. To help prevent fires caused by air raids from spreading, the idea of firebreaks was pursued, in which certain buildings in crowded areas were designated for demolition.

Many people who had been mobilized for this work, from neighborhoods, work places, and schools, died in the atomic bombing that day. According to a special exhibition held at Hiroshima Peace Memorial Museum in 2004, roughly 75% of the 2331 mobilized students--1749 students from 12 schools, including national schools and junior high schools--were killed. In the area known as Kokutaiji 1-chome are found a memorial to the memory of female students and others who became victims of the blast and a monument which indicates the site of the demolition work. The neighborhood association there organizes a memorial service every August 6. “A lot of people died around here,” said Kyoko Kitani, 88, who was born in the Zakoba district and faithfully tidies up around the monuments. “We can’t forget that fact.”