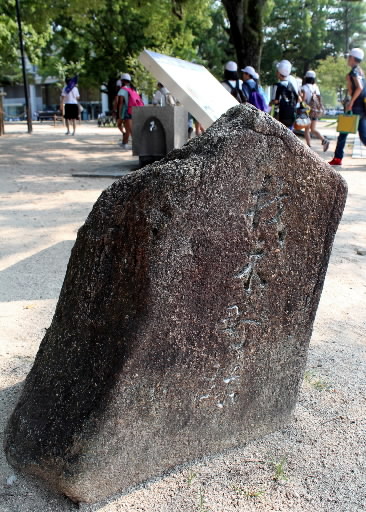 Stone monument raised for the victims

The Zaimoku-cho district was once a part of today’s Nakajima area. Zaimoku-cho lay from the Cenotaph for the A-bomb Victims to Peace Memorial Museum and the southern side of Peace Fountain. The name Zaimoku-cho was used until 1965, when the city’s address system was revamped.

In English, “zaimoku” means “timber,” and this designation for the district is said to have originated from the fact that the area was home to many lumber dealers. According to Hiroshima City Hall, however, the number of lumber dealers declined around the beginning of the Showa period, which meant there were few lumber dealers left in the district at the time of the atomic bombing.

The Zaimoku-cho district was a lively area, featuring the Seigan Temple, known for its massive main gate, and shops selling rice, vegetables, meat, noodles, and sweets. The barber shop run by Masae Kimura’s mother and grandfather moved here from the neighboring Nakajima-shinmachi district, part of their evacuation effort prior to the bombing. However, the atomic bomb annihilated this area.

Some residents of the Zaimoku-cho district, who survived by being away from the area that day, were forced to move by the early 1950s when Peace Memorial Park was being constructed.

In 1957, former residents of the Zaimoku-cho district erected a stone monument to remember their old neighborhood and offer prayers for the A-bomb victims. The monument, inscribed with the words “Site of the Zaimoku-cho District,” continues to stand silently in Peace Memorial Park.