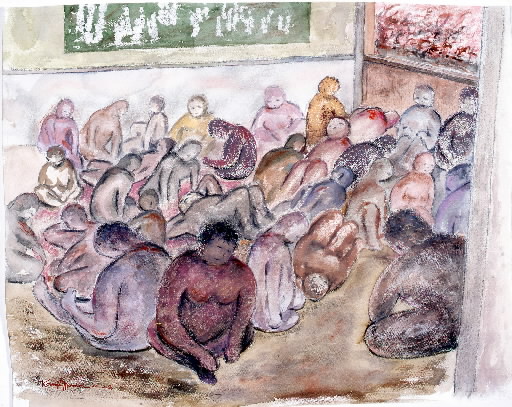 Bones from 2,000 victims are unearthed

Koi National School (now Koi Elementary School in Nishi Ward, Hiroshima) became a relief station after the A-bomb attack and took in scores of wounded. Many of them were boys and girls hit by the blast while mobilized to help create a fire lane in the city center.

A note made by an A-bomb survivor, describing conditions at the school that day, states: “There were so many victims on the floor, their bodies burned and skin peeled away, that there was no space to walk.” This scene illustrates the misery of that time.

Ditches were dug on the school yard, and a great number of bodies were cremated there. In 1949, human bones from about 2,000 victims were unearthed.

In the summer of 2010, former students of the school who experienced the atomic bombing there raised a memorial at the site. The school has held a memorial service every August, since the year 2000, with students taking part in the ceremony.

Kazuichi Nakayama, the school principal, said, “I hope children understand that nuclear weapons shouldn’t be produced or used, and that this message should be conveyed to others.”