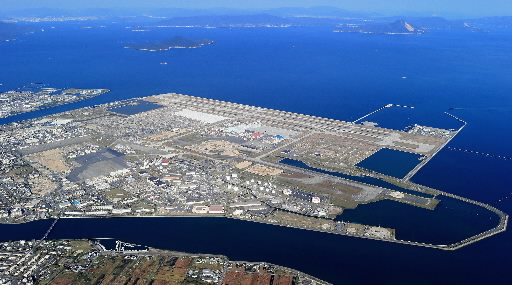 Airport for civilian aircraft, too

At the mouth of the Nishiki River, which flows through the city of Iwakuni, is the U.S. Marine Corps Air Station Iwakuni. Apart from Okinawa, this is the only U.S. Marine Corps air base in Japan. The Japanese Self Defense Force also uses part of the site.

The origins of the base go back to 1938 when the Japanese Imperial Army bought the land from residents and built Iwakuni Airport. The Iwakuni Naval Air Group was then established in July 1940.

One month after the end of World War II, in September 1945, the U.S. Marine Corps came to Iwakuni and was stationed at the base. Troops from the United Kingdom and Australia were subsequently posted at the base, too. When the U.S.-Japan Security Treaty went into effect in April 1952, the British and Australian soldiers withdrew and the base became a U.S. Air Force Base.

In July 1962, it was made a Marine Corps air station. During the Vietnam War, in the 1960s and 1970s, and the Gulf War in the early 1990s, soldiers and supplies were dispatched from Iwakuni for the battlefields.

Meanwhile, the citizens of Iwakuni have endured noise pollution and the risk of accidents. Thus, land was reclaimed to build a new airstrip on the far side of the city, the new airstrip opening in May 2010. From the Naval Air Facility Atsugi in Kanagawa Prefecture, about 60 bombers are expected to shift to the Iwakuni base.

Last December, the Iwakuni Kintaikyo Airport opened at the base, which also functions as an airport for civilian aircraft.