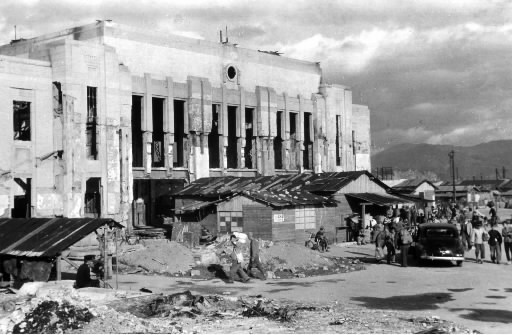 Hiroshima Station is located in Minami Ward, about 2 kilometers from the hypocenter, and was severely damaged in the atomic bombing. It was Japan’s first concrete station building, but the ceiling collapsed and the building was gutted by fire. With the number of visitors to the station increasing, an additional waiting room had been built, but that wooden structure burned down, too. Seventy-eight bodies were reportedly found at the site.

The day after the blast, service on the Ujina Line (now discontinued), which was being used as a railway for the military, was restored. Operations on other lines were gradually resumed, too. Trains played an important role in relief efforts after the bombing by carrying the wounded to safer locations.

In fact, in the aftermath of the blast, trains shuttled back and forth between the city and stations located in areas that had escaped damage. For instance, a record made on August 6 by a worker of the National Railway indicates that, on the Geibi Line, apart from the freight train which carried the injured from Hiroshima to Bingotokaichi Station (present-day Miyoshi Station in the city of Miyoshi), a relief train departed from Bingotokaichi Station and went to Yaga Station (in today’s Higashi Ward), one stop before Hiroshima Station, then returned carrying survivors of the bombing.