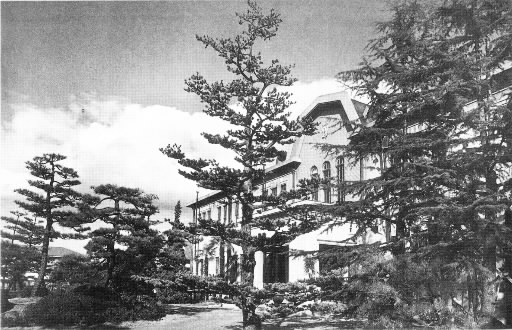 According to a record of the damage wrought by the atomic bombing, on August 6, the day the bomb was dropped, about 160 first-year students, along with about 20 second- and third-year students who hadn’t been mobilized for work because of poor health or other reasons, were at the college. In addition, around 60 soldiers from the Akatsuki Corps, a military unit, were present at the college, too, waiting to ship out.

The college was located approximately 3.3 kilometers from the hypocenter, and there were injuries on the campus, but no deaths. However, two students who were ill and staying in a dormitory in Higashisenda-cho (in today’s Naka Ward) were killed. And six students who were on their way to school went missing, and were later identified as victims.

The auditorium was badly damaged, and the school building suffered damage, too. The wooden building leaned to one side, its windows shattered, but it escaped the fires that consumed the city. As a result, the building became a temporary relief station.

After the bombing, the city center was a burnt plain, with universities and other schools of higher education razed to the ground. For the next two years or so, the Hiroshima Prefectural College for Women played an important role in the cultural life of Hiroshima.