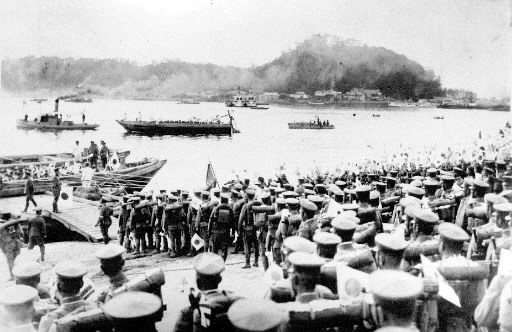 The construction of Ujina Port, located in the southern part of the city, was begun in 1884 by then Hiroshima Governor Sadaaki Senda (1836-1908). He felt that a good port should be created to help develop the city of Hiroshima.

Despite a number of difficulties, which included local opposition over damage to oyster and seaweed production, and a destructive storm which hit the embankment, the port was completed in 1889. While the port was being built, it is said that Mr. Senda covered the shortfall for the costs from his own pocket.

The port played an important role in several wars. When the First Sino-Japanese War broke out in August 1894, soldiers and supplies were dispatched to the front lines from the Ujina Port. That same month, a railway from the port to Hiroshima Station, the Ujina Line, was constructed in only 17 days. (The Ujina Line was discontinued in 1986.) Later, many soldiers left for battle from this port during the Russo-Japanese War and World War II.

In 1932, the name of the port was changed to Hiroshima Port. In the aftermath of the atomic bombing, many wounded were taken from the port to a temporary relief station on Ninoshima Island, part of present-day Minami Ward.

Today’s passenger terminal is located west of the original building.