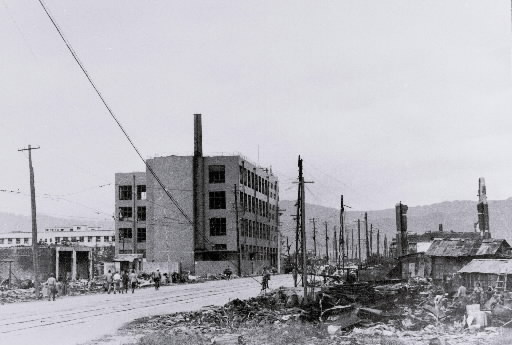 Located in Sendamachi (part of present-day Naka Ward), the branch of Hiroshima Chokin Bank where Ms. Yamanaka worked was about 1.6 kilometers from the hypocenter. The building, completed in 1937, was made of ferroconcrete and consisted of four floors and a basement.

According to a record of the A-bomb damage in Hiroshima, the blast turned the building into a whirlwind of window glass, bookshelves, desks, and chairs, and many people were killed or injured. The elevator no longer worked, and when people dashed down the stairs, the handrails and walls were stained red with blood.

In a report made in 1995, the 50th anniversary of the atomic bombing, by the former Chugoku Postal Administration Office, which took over the operation of the branch, the names of 90 victims at the building, including those in a separate office in Fukuya Department Store (in Naka Ward), were confirmed.

In the aftermath of the bombing, the basement became a site of refuge. One woman who came to the basement seeking shelter ended up giving birth with the help of a midwife. Sadako Kurihara (1913-2005), a well-known poet from Hiroshima, heard this story and created the A-bomb poem “Umashimenkana” ("We Shall Bring Forth New Life").

The building underwent a series of repairs after the war, and was used for a long time, but finally was demolished in March of 1989.